Cherry blossom season in Japan is the perfect time for a leisurely walk outside to soak up the sunshine after a long, cold winter and to enjoy the splendor of cherry blossoms in full bloom gently swaying back and forth in the cool April air.

Kyoto’s Higashiyama District offers the ideal setting for such a spring outing.

There is a stone-covered path lined with cherry trees, which runs alongside a little canal winding its way through the quiet and green neighborhood of Higashiyama. This is the Philosopher’s Path, or Tetsugaku no Michi, as the path is called in Japanese, one of Kyoto’s most enjoyable walks.

In spring you will have such spectacular views of cherry blossoms that you cannot stop snapping one photo after another of the frail pink petals, with literally hundreds of cherry trees lining the path. When they are in full bloom, the whole neighborhood becomes an ocean of pink.

This is one of the Kyotoites most popular hanami or cherry blossom viewing spots.

The trickling sound of water and the chirping of birds make for a tranquil atmosphere seldom to be savored in a Japanese big city. Kyoto’s city center can be very busy but here at the canal you will still find pockets of peaceful quietness – the more so, the further down you venture the path away from its starting and ending points.

Some stone bridges occasionally cross the stream, flanked by willow trees whose branches bend so deep that they straddle the water. Colorful carps circle playfully around in the water and hope for some morsels from locals and tourists alike.

The path runs north to south along the foot of Kyoto’s Eastern Mountains. Some temples at the foot of the hills have picturesque grounds and gardens but they are often skipped by visitors who have only Kyoto’s famous temples on their itinerary.

If you walk straight through, then it would take only half an hour to complete the walk from one end to the other. However, you don't want to march by all the interesting temples and shrines along the way.

Leave the crowds behind and check out Honen-in and Anrakuji, two smaller temples just off the Philosopher’s Path. With Zen in the air, these temples invite you to linger and contemplate life, and you won’t be the first one who has done so here.

The path is said to have received its name from a group of academics who became known as the “Kyoto School”, a philosophical movement. The group’s leaders, Professor of Philosophy Kitaro Nishida (1870-1945) and Professor of Economy Hajime Kawakami (1879-1946) lived in this neighborhood and they often walked this path to the nearby campus of then Kyoto Imperial University.

Kitaro Nishida's memorial is an unassuming stone at one corner of the path. It features an engraving that summarizes his philosophy of life: "You are you, and I am I, and I will live as I believe.” Now, this concept is unusually individualistic for Japan, but then Nishida was a philosopher.

Ginkakuji , also known as the Silver Pavilion Temple is located at the northern end of the path and most walkers start their journey there. Upon arrival in spring, you will be greeted with cherry blossoms and admiring the glorious bloom right there might make you forget time and the fact that you meant to walk along the whole stretch of the Philosophers’ Path.

Don’t worry, this path is there for you in all seasons and we hope that you will come back time and again.

Find out more about Philosopher’s Path. 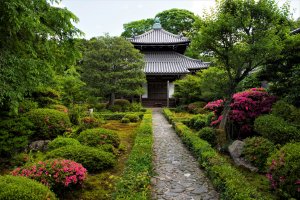