Man in the Moon Irish Pub at Kyoto

Fish and Chips at the Station, Pig & Whistle style

The summer of 2003 was one to remember. On a hot sleepless night a bunch of us watched England play Sweden in the World Cup Football finals at the Pig and Whistle. England was battling hard against a determined Swedish outfit, and both had to win for a chance to get out of the group of death. After going hoarse with screaming, England scores with a powerful header from Sol Campbell. And so living on exhilaration and hope, we partied all night till dawn, with our new found friends from the pub.

In 2008 the team at Pig and Whistle opened their latest watering hole, the Man in the Moon, conveniently located opposite the New Miyako Hotel, just west of the South (Hachijo-guchi) Exit to the JR and Kintetsu Kyoto Railway Stations. Like the Pig and Whistle, Man in the Moon makes a great drinking hole away from home, a place to celebrate with friends and to cheer on your favorite or adopted team.

With a tiny footprint, you are likely to stack the bar if you came with your football team. Somehow they can fit three large TVs between the counter and the barrel shaped bar stool tables. On most nights the sports channel is likely to show the latest international tournament or the league game, so whether you are following rugby, football or baseball, don’ t miss out when you are away from home.

There are also seven beers on tap including Guinness, Kilkenny, Bass Pale Ale, Sapporo, Yebisu, and Heineken from 950 yen a pint. Lowenbrau is on tap from June to November, while Hoegaarden gets the tap treatment from December to May at a steep 1400 yen a pint. Luckily happy hour lasts a good eight hours on weekdays to 7 p.m., or you can try the half pint Sapporo for just 300 yen at lunch. Just make sure you have hard currency, as they don’t take credit cards, only cash. Fortunately the Seven Eleven and Japan Post ATM is nearby.

There are also 60 brands of single malt whiskies on the menu, so even if you make this your local each week, it will take you more than a year to get through the whole collection.

This place is also popular with locals and returnees, and actually my first time here was at the behest of a Japanese returnee from New Zealand, hoping to fill the deep pond of nostalgia with some Fish and Chips. While the food isn’t quite like home, the pub has a fun, weekend atmosphere, without any of the drunken scary craziness elsewhere. There are plenty of seats before 7 p.m., and if you aren't that hungry, there are half size servings, like the half size chicken and chips for 550 yen. The Japanese offering is limited to Edamame beans, however, they more than make up for that with a great choice of Japanese Sakes, Shochu, Umeshu, Beers and non- alcoholic beverages.

When I first stopped by at this pub, I had to do a double take at the sign. I originally thought, “Man on the moon”, as in Neil Armstrong, the first man on the moon from the space mission. Actually “Man in the Moon” is named after a chic pub in Chelsea, England. They even had a theater in its basement. These days the only theater you can see outside the pub in Kyoto are the heartfelt farewells amongst the crowds of long distance passengers waiting for the midnight coaches to regional Japan. This makes it a great place to have a meal if you are waiting for the coach itself. Just make sure you don’t miss your bus, as this pub closes at 4 a.m. on weekends and 2 a.m. during weeknights. 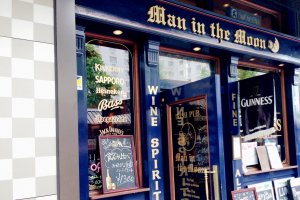 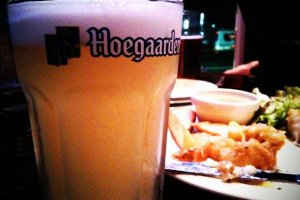 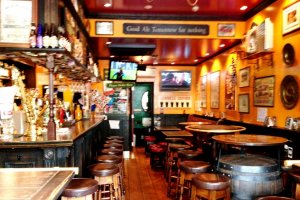 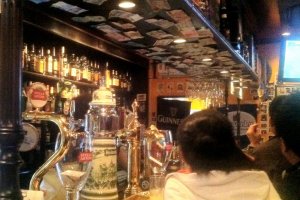 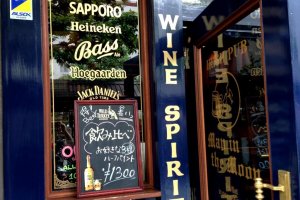 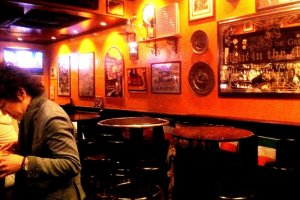