Learn about Buddhist culture and artefacts

This place I found pretty much by chance. On the long walk to my hotel from Kyoto station after I'd arrived for a visit, I see this museum with its striking wooden facade, and pick up a leaflet to look at later. One check-in later, a read of the leaflet suggests it's an interesting place, so I head straight back for a visit.

The museum is associated with nearby Ryukoku University, and aims to introduce and explain to visitors the history and spread of Buddhism through its exhibitions. Many of the items on display are from the University's own collection, with others loaned from other museums and from temples around Japan. While there's no English explanations with the exhibits, the museum does provide an English list with brief details.

When I visited, the exhibit on the second floor was of various Buddhist artefacts from other parts of Asia. There were statues from India, Cambodia and Myanmar dating back to the 3rd or 4th centuries, and some equally ancient relief carvings from Gandhara, a region of central Asia in what is now Pakistan and Afghanistan. They were fascinating in their own right, and the variation in styles was also interesting.

The third floor was given over to Japanese Buddhism, with a wide range of objects on display. Highlights for me were a colourful, highly detailed silk mandala, a serene statue of the Amida Buddha made in 1329, and one of a fierce-looking Bishamon-ten, Buddhist god of warriors, standing on the body of a recently punished wrongdoer.

As well as all this, there is on permanent display a walk-in replica of one of the Bezeklik Cave Temples. These temples in the Xinjiang Uyghur Autonomous Region were decorated with beautiful, highly detailed paintings, and this exhibit recreates the experience of entering the temple, as the walls and ceiling are completely covered with digital recreations of the paintings.

The museum is immediately across the road from Nishi-Hongwanji temple; it's 12-15 minutes' walk from Kyoto station, about ten minutes from Gojo station on the subway Karasuma line. If you're coming by bus, get off at the Nishi Hongwanji Mae stop, served by routes 9, 29 and 7.

It's open daily except Monday from 10:00am to 5:00pm, opening on Monday and closing on Tuesday if the Monday is a national holiday. Admission costs JPY550, with discounts for senior citizens, students, and groups of 20 or more, and free admission for children under 11. 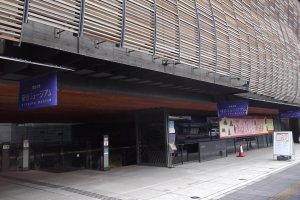 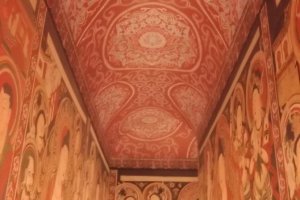 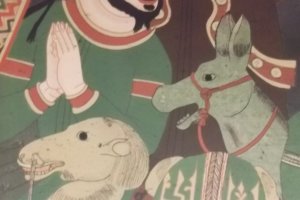 Justin Velgus a month ago
Big cities are packed with these unique finds. They can't all fit into a guide book and can get buried online. Thanks for brining it to our attention!
Reply Show all 0 replies

Kim a month ago
That's one cool looking building, and the displays inside seem equally so!
Reply Show all 2 replies

Sleiman Azizi a month ago
I was thinking the same thing, what an interesting building...
Reply

Kim a month ago
I would have been compelled to explore inside from the exterior, for sure!
Reply
4 comments in total