History, statues and songs at this charming temple

Something I'll always enjoy about Kyoto is the unexpected discoveries, the random little shops and temples and shrines that I'll happen upon while I'm walking around. Looking at a map on the street by Omiya station I saw this temple was nearby, so off I went to duly investigate, and found it a fascinating little place.

The grounds are quite spacious, with a number of halls and statues, strikingly a conical stupa decorated with exactly a thousand small statues, and one hall featuring a theater stage where performances are sometimes held. Near the east gate is the Amida-do, a small hall where there's enshrined a statue of the Amida Nyorai, the Buddha of Limitless Light.

It's when you pay the small entrance fee in the Amida-do that things get interesting. Go through and cross the red bridge - symbolically, from the material to the spiritual world - and you'll find the graves of the leader and some members of the Shinsengumi, a special military police force formed by the Tokugawa shogunate in the early 1860s, who used the temple precincts as their training ground.

There's some information about the force, a bust of its leader, Kondo Isami, and a tower in which some of Isami's hair is enshrined. And as you take all this in, you can listen to "Ah Shinsengumi", an 1955 enka song about the corps, by pressing a button on a monument by the graves.

Also here you can go downstairs, to what's called the Historical Document Viewing Room. It does indeed have some documents on display, but they also have here some of the temple's treasures, including some beautiful Buddhist statues. Then as you leave you come back past the ticket counter through the Amida-do, where there's a small shop selling gifts related to the temple and the Shinsengumi.

I thought I'd finished here so I left, but looking at the website suggests there's more to see in the worship halls, so next time I visit Kyoto I'll have to go back! 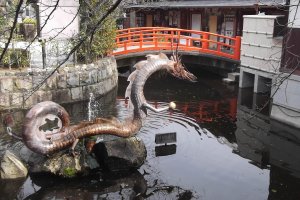 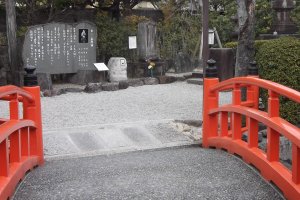 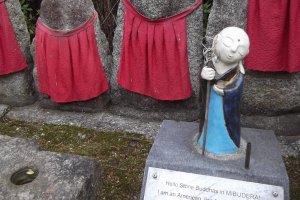 Justin Velgus a month ago
The dragon is reason enough to visit the temple!
Reply Show all 0 replies

Kim a month ago
Love the pond!
Reply Show all 2 replies

Sleiman Azizi a month ago
Love the dragon, love the pond. Love it all, LOL
Reply

Kim a month ago
Yes! I mean, I feel that way a lot about Japanese design/aesthetics. It's all so thoughtfully put together!
Reply

Sleiman Azizi a month ago
Unexpected discoveries are all. Love the dragon.
Reply Show all 0 replies

Bonson Lam a month ago
Visiting these treasures in Kyoto is like peeling an onion. Every time you visit, you see it on another level.
Reply Show all 0 replies
6 comments in total