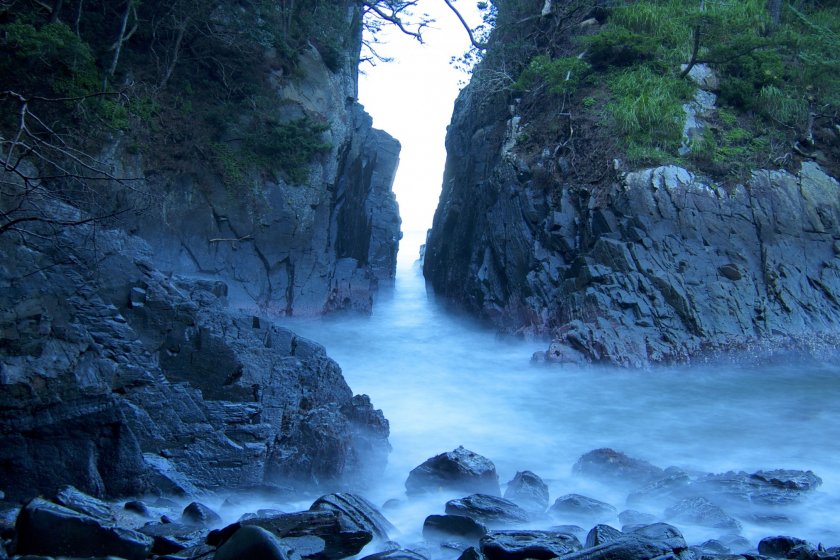 The whale, the god, and the rock

Legend has it that two villages came upon a beached whale. The whale was a gift from gods as it could feed the villagers for a long time, provide whale bones for tools, and oil for lamps. However the villages of Tokura and Jusanhama had been in a long disagreement about their borders and the whale only exacerbated the issue. No one could agree as to what village the whale had washed up in. Since the two villages could not come to an agreement about the whale before the sun set they agreed to sleep on the issue and begin discussions again in the morning.

In the middle of the night, a massive thundering crack echoed throughout the area. The villagers of Tokura and Jusanhama rushed to see what had caused the sound. To their surprise a massive rock in the ocean was cloven in two. The villagers agreed that this was a symbol of god’s judgment regarding the discord between Tokura and Jusanhama. In the end the two villages decided to settle their differences by establishing the border by the broken rock and agreeing to split the whale in two.

Regardless of the truth to the story there is no denying the appearance of this massive break in the rocks. Kamiwarizaki can be translated as,“broken by god.” The aforementioned kamiwari rock formation is about a 10-minute walk from the main campground of Kamiwarizaki. This is a fantastic place to pitch a tent. The campground is a 2-hour drive North by Northeast from Sendai and accessible from the coastal highway 398 that runs along the coast into Shizugawa.

The hours vary for checking in depending on the season. They are always closed on Tuesdays, otherwise, from April to November​ the hours are 10:00 to 15:00 and from December to March, 11:00 to 14:00. Prices vary quite a bit based on what you might require at the campsite but they basically start at ¥900. Then depending on what you would like to do with your vehicle that adds cost. There is ample parking for cars but certain car sites can be ¥​3000. A restaurant is in the tourist plaza and main office at the entrance. Several small log cabins are on an eastward facing hill. The cabins can be rented instead of using a tent and sleep up to five, but are tight quarters and run ¥​5000. If you’d still rather sleep outside with only a thin layer of nylon between you and the stars, but don’t have your own tent, you can rent them from the main office for ¥​1500.

There are many BBQ's and food washing stations as well as several sheltered bathrooms. The showers cost ¥200 for a few minutes but I would head down to Hotel Kanyo and use their onsen instead. The views from the main camping area are excellent as well. Looking out through the tall coastal pines of Japan due East out into the sea. Most of the campsites are situated on a cliff with a clear view of the ocean but far enough back so that everyone would be comfortable.

One thing that really separates the Kamiwarizaki site from other campsites is the sunrise. At certain times of the year the sun rises in between the rocks of the Kamiwari rock formation. Even if its the wrong time of the year to witness that special sunrise, the sunrise won't be something that you are likely to forget. Japan is often referred to as, "the land of the rising sun" for a reason. Take a camera and a tripod or your yoga mat and fix your gaze on the horizon, you're in for a treat.

The main campground area is on the north side of the cape that separates Minamisanriku and Ishinomaki. An Earth Camp organization often utilizes the campground, so you may see a mixed Japanese and international group from time to time. The rock formation which gave the place its name actually lies on the Ishimomaki side of the cape. Maybe there is some truth to that legend after all . . . 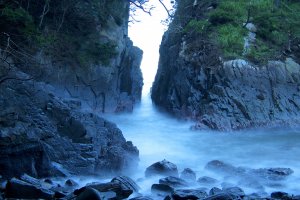 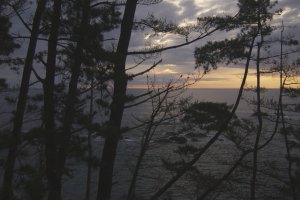 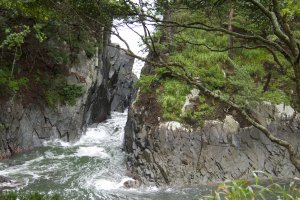 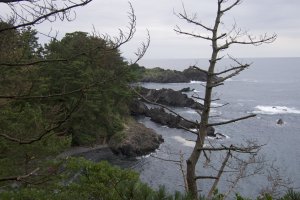 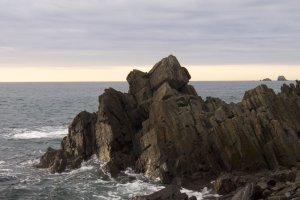 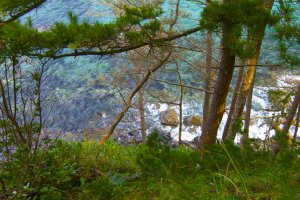 James Forest 6 years ago
Freakin nice photos! I love the long exposure you did as it brought about a mysterious quality to the photo.
Reply Show all 0 replies

Andrew Kehoe Author 6 years ago
@telloyd, thanks for the photo compliment. It's easy to take pictures such awesome looking places.
Reply Show all 0 replies

JapanTravel Guest 6 years ago
Awesome photo of the cracked rock and great story telling about how that crack got there -- this is the perfect vignette of countryside Japan.
Reply Show all 0 replies
3 comments in total