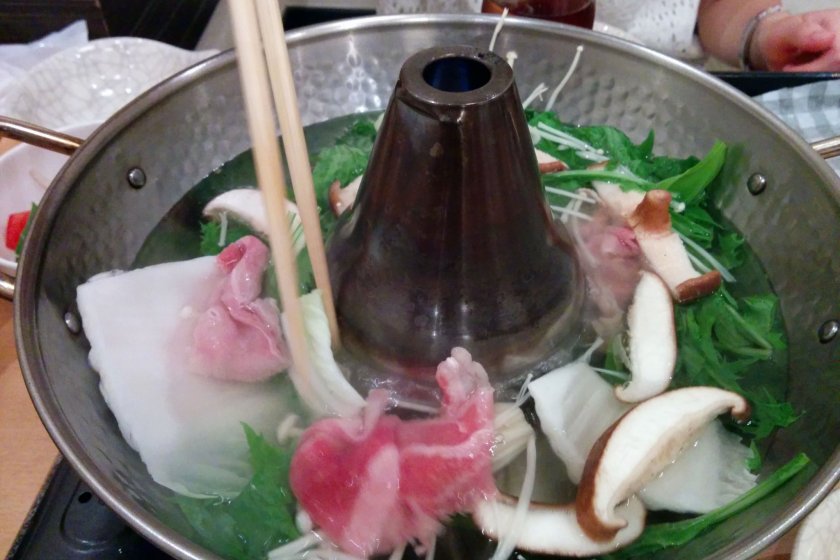 Fill your bubbling brew with all kinds of meats and veggies

Thanks again to the Sendai Lunch Passport, I was able to find another great eatery in the city and receive a sizable discount. Just a five minute walk from Hirosedori or Kotodaikoen subway stations I found Oretachi no Tabehoudai Shabusen (俺たちの食べ放題しゃぶ仙). The menu features great drinks, crab, and sukiyaki. But those are just the side attractions! I will talk about my visit on a weekday afternoon for their lunch special.

Oretachi no Tabehoudai Shabusen is first and foremost a shabu shabu restaurant. Shabu shabu can feature any number of vegetables or meats; most often you cook these yourself at your own table. The word shabu shabu refers to the movement of waving meat side to side with your chopsticks in the hot broth mixture. When it comes to food, this restaurant gets full marks. Enjoy three choices of tender and juicy meat and fresh veggies delivered daily from Sendai's local Asaichi Market; your taste buds will thank you. For 1000 yen you can enjoy this lunch special which also comes with yakisoba, miso soup, juice or tea, salad, and a few simple desserts. As advertised in the restaurant name, this special is a "tabehoudai" or all-you-can-eat! For an extra 500 yen you can add sushi to this buffet as well. Usually at buffets you should pace yourself, but with only a 60 minute time limit, it's okay to get a little wild.

While the food was spot on, the setting was 50/50. You take your shoes off at the entrance, then sit in one of two tatami mat seating areas. The decor was fair, service and friendliness of staff great, but I felt a little uncomfortable while eating for two reasons. First is the restaurant is a little cramped. The food is set on the counter in front of the kitchen. Right along that is the only hallway that runs through the restaurant, connecting the seating areas, exit/entrance, and restroom. Every time I went through the hallway, I had to turn sideways to let let someone pass. This won't be a problem if you are not eating the self serve buffet. The seating area is fine when not crowded, but some tables are so close that there was someone behind me on the tatami mats I was nearly back-to-back with someone. In fact, we bumped a few times. The second reason was the heat. With all those pots boiling over an open flame, the area I was sitting in became very hot. I went on a very hot day, so I am sure that factored in, too. It's cool in the hallway, and unlimited drinks are included, so there are ways to cool off. Being so close to other tables may limit privacy, but it also encouraged conversation. There is some upbeat Japanese music playing and I found the restaurant a fun place despite the mentioned drawbacks.

The restaurant is open for lunch 11:30-14:30 and dinner from 17:00-24:00. The dinner menu features various set all-you-can-eat options of shabu shabu, crab, sushi, and sukiyaki with all-you-can-drink alcohol and soft drinks included! Prices range 3000-5000. All in all, great food with a good price in a downtown location. Happy eating at Oretachi no Tabehoudai Shabusen. 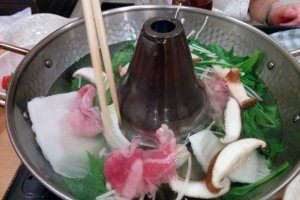 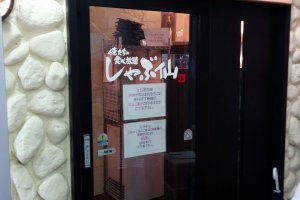 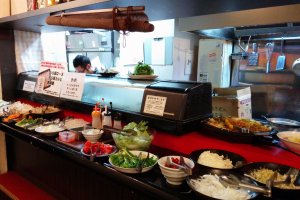 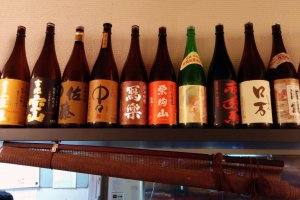 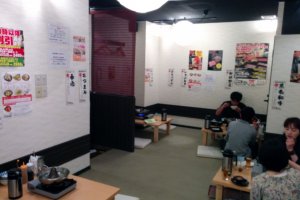 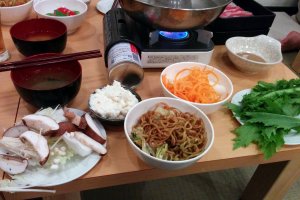