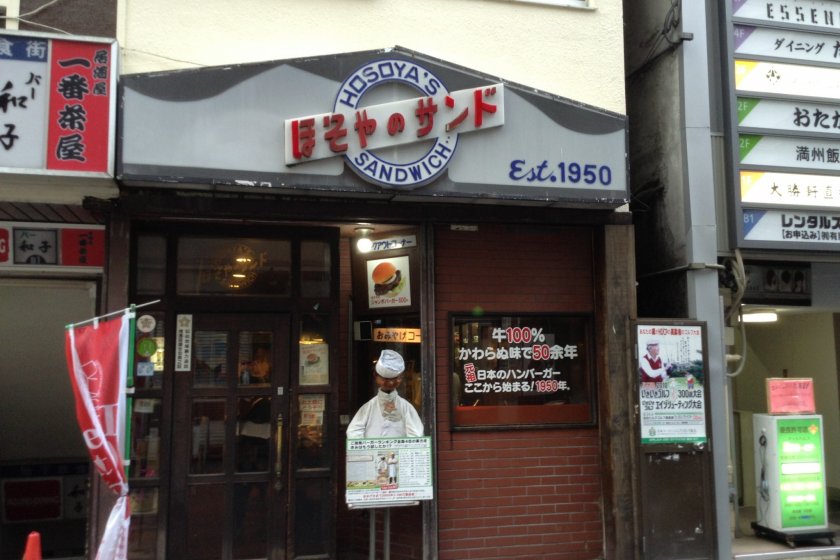 The storefront of Hosoya Sandwhich, one of the oldest burger shops in all of Japan.

How good can burgers be in the Land of the Rising Sun? It’s best to answer that question after a visit to Hosoya Sandwich, one the oldest hamburger shops in the entire country. Near the shopping district of Ichibancho, it is located just a 15 minute walk from Sendai station in the heart of the city’s entertainment district: Kokubuncho.

While sushi, tempura, soba, and a big side of rice or miso soup might be a more appropriate image of what Japanese food is to Westerners, burgers are quite the rage here with food fanatics. A quick online search yields entire websites and even magazines that discuss nothing more than the art of burger making and where to eat such a mouthwatering masterpiece. Keep searching and you can retrace burger history. When Americans came over after the war for their several years of occupation, they brought along their love of hamburgers. Japanese chefs copied, modified, or created their own burger creations to satisfy the new market of customers, introducing the burger to Japanese citizens in the process. Sasebo burgers, created because of the military base in the area, are popular down south near Fukuoka and Nagasaki. Here up north it’s a different story. Just as old and possibly a bit older is Hosoya Sandwich.

After passing stores with pictures of half-naked women, countless bars, and restaurants open all night long (it is the entertainment district after all), you reach Hosoya Sandwich. An old mechanical doll named “Mr. Dandy” (it no longer works, just sits there) greets visitors at the entrance. It was a favorite toy of the founder of the restaurant and has been the restaurant’s mascot and scaring away children since its opening way back in 1950. Mr. Dandy is holding a sign in Japanese that explains a bit about the history of the restaurant, as well as that it uses all beef in their patties. It goes on to say this small shop has sold more than a million burgers as of 2002! Go inside, order some grub, then strike up a conversation with the owner to discover the inside story, since the store does not have an official website.

You walk in, seat yourself at one of just a dozen counter stools, then place your order. The menu is fairly simple with a few types of burgers, fries, salads, as well as coffee, juice, soda, or alcohol. I ordered the Jumbo Burger, also known as the Sendai Burger after the city’s namesake; this as you may imagine is a plus-sized patty burger. I added fries along with a Heineken and a Kirin beer. I was feeling quite international as I waited for my American-style burger and fries, alternating between small gulps of Dutch then Japanese beers.

Smelling the juicy aromas from the kitchen grill, I let my eyes wander to distract myself from my hunger. Golf memorabilia, a saxophone, a smiling man with the words “Coffee Hamburger” written on a poster? It just didn’t make sense. As I talked to the staff and current owner I was clued in on the whole story. Hosoya Sandwich started with the owner’s father. For many years the father and son team served great burgers together until the father unfortunately passed away. (After several minutes into our conversation, the son switched to perfect English to finish the story for no apparent reason. Fine by me!) The son pointed out the poster on the wall is an image of his father. The golf clubs on the opposite wall, including a rare wooden 1896 club, belonged to his father. Our host’s father was an avid golfer and there were several signed pictures of golf celebrities he met as well. The saxophone it turns out belongs to the son who wanted to display his own hobby. Before the end of our conversation the food had arrived.

Receiving an inside tip, before diving into my burger I checked out the bottom bun. There it was. Seared into the bottom of every hamburger bun is the Hosoya logo with the year (1950) the restaurant was established. A quick photo and the feast commenced. The bun and fresh ingredients were good, but nothing too spectacular given Japan’s high standards of quality. The meat however was some of the best I have had in a long, long time. Incredibly juicy and grilled just right, it brought the burger together into a cohesive meal that was delicious until the last bite.

Hosoya Sandwich is located inside the Kokubuncho entertainment district, but closes a bit early at 10 or sometimes 8 at night, long before the area gets too crazy later in the night, between the odd happy drunkard and people kicking off their shoes to enjoy the nightlife. A burger, fries or salad, and a drink costs between 1100-1500 yen. The restaurant has tasty burgers, friendly staff, and a lot of local, family, and burger history. Highly recommended when you crave a Western burger in the East. 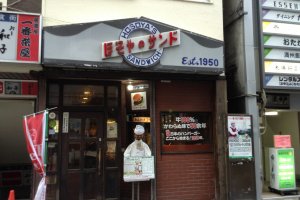 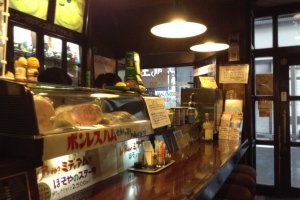 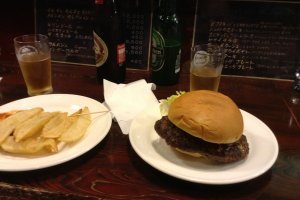 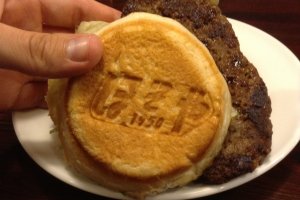 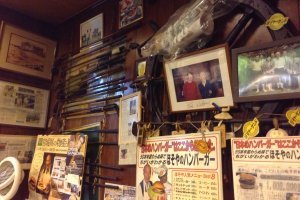 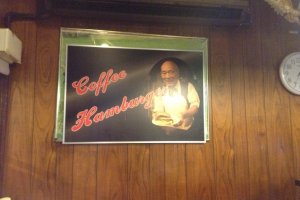