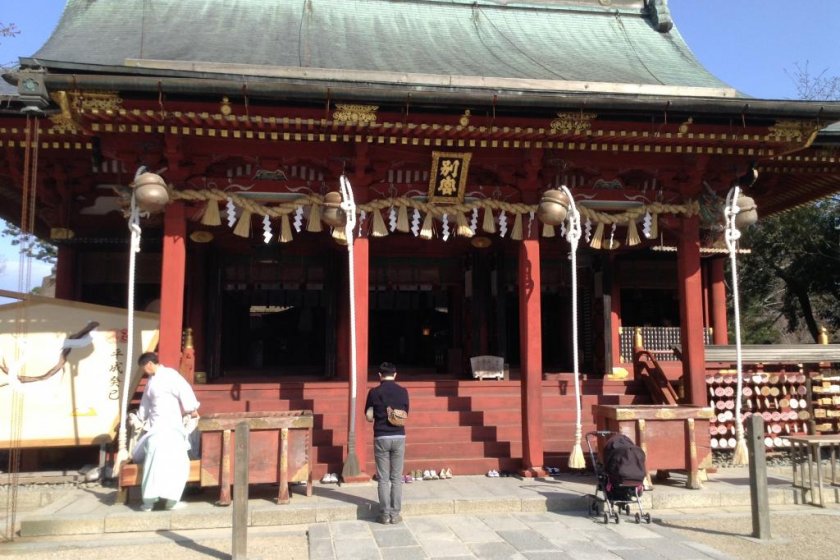 A port of call for cultural properties

With 15 cultural properties, it is no wonder Shiogama Shrine has many different buildings on its grounds.

Less than a 30 minute train ride from Sendai Station and a stone’s throw away from a pleasurable Matsushima cruise rests Shiogama Shrine. The shrine puts the town of Shiogama on the map with its 15 Important Cultural Properties, interesting history, and stunning landscape. While most shrines, or temples for that matter, can be viewed in thirty minutes or less, it would be best to bring some good walking shoes and a fully charged camera for this adventure.

One thing I always enjoyed about Japan is the mystery and legends you can find in everyday life. Sometimes a certain suspended disbelief needs to take place in order for things to function as they should. For example, most scholars believe that the first several emperors in Japanese history did not even exist, despite the official Japanese go-to-history-guide the Kojiki listing the first emperor as 126 years old when he passed away! Some disbelief, or should we say open-mindedness, is needed for Shiogama Shrine. While most of its buildings are indeed hundreds of years old, its history could be thousands of years old—could be. There is no official date when the shrine was first constructed, but local lore says the Sun Goddess Amaterasu sent two deities to Japan and a third seperate deity guide to develop the Tohoku (northeastern) region of Japan over 2000 years ago. They taught the people how to develop their own culture and technological feats for the time such as how to obtain salt from the sea. As a sign of gratitude they were enshrined at Shiogama way back then.

Your modern journey starts a ten minute walk from Honshiogama Station at a stone tori gate. Take a few pictures then get ready to huff it up 202 stairs to the entrance of Shiogama Shrine. Lining the path upwards are small statues and lanterns. Taking more pictures is a perfect excuse to catch your breathe. Heart racing, you reach the top—then your heart stops for a moment as you are met with beautiful vermillion structures surrounded by sky-scraping trees. The many buildings of the shrine complex just keep getting better as you stroll on through. Later on there are magnificent gardens that open up to a scenic view with the ocean in the distance. If you are lucky enough to arrive during spring, you may catch a glimpse of a special cherry blossom that only grows in the area called the Shiogama-zakura. And then there are the anchors, seemingly out of place.

My first thought was: I would hate to be the one to have to carry these up those stairs! From that moment I begin to learn that one of the enshrined deities at the shrine protects fishermen. Being a coastal town, Shiogama has a long history with fishing and other sea activities. You can learn a little more about this at the onsite museum. It shouldn’t be too hard to find, just look for the ancient harpoon gun and whale skull on the outside wall!

Following the route up the front stairs and paths that lead naturally through the gardens and past the museum, you end up making a partial loop back to the main street you came from, but this time you are slightly closer on your trip back to the station. Shiogama has something for anyone wanting to experience traditional Japan. With its cultural wonders on display and easy access from beautiful Sendai, make sure to include it on your next itinerary to Tohoku.

Find out more about Shiogama Shrine. 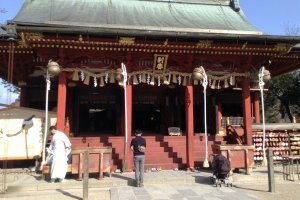 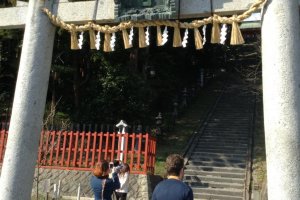 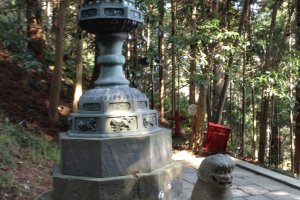 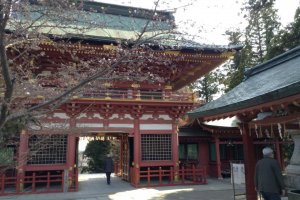 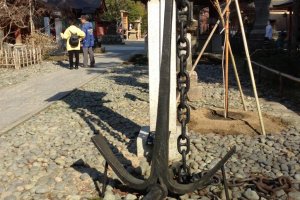 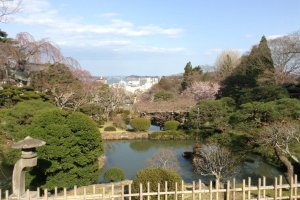 Hiroko Maruya 7 years ago
I went there yesterday. I enjoyed Shiogama shrine itselt and the view of the ocean seen from the shrine. I found some families who were celebrating the day for children aged seven, five and three called "Shichi-go-san". The most of children and their mothers wore beautiful Kimono. They looked so nice. I was happy to see them. You can probably see "Shichi-go-san" on the weekends until November 15. Thank you for information of Shiogama shrine.

Radica Sooknarine 7 years ago
I went there on Saturday. It was very busy with quite a number of visitors, and there was also a wedding taking place. Seeing the bride, groom and guests in traditional Japanese clothing added to the atmosphere. It was absolutely beautiful. I highly recommend this place for a visit. It will be especially awesome in Spring with the cherry blossoms in full bloom!
Reply Show all 0 replies

Bonson Lam 9 years ago
Imagine being here a few hundred years ago and retracing the footsteps of the people who have built this complex. And today we can experience the same beauty in springtime with the unique Shiogama-zakura. Thank you for sharing this Justin!
Reply Show all 0 replies
3 comments in total