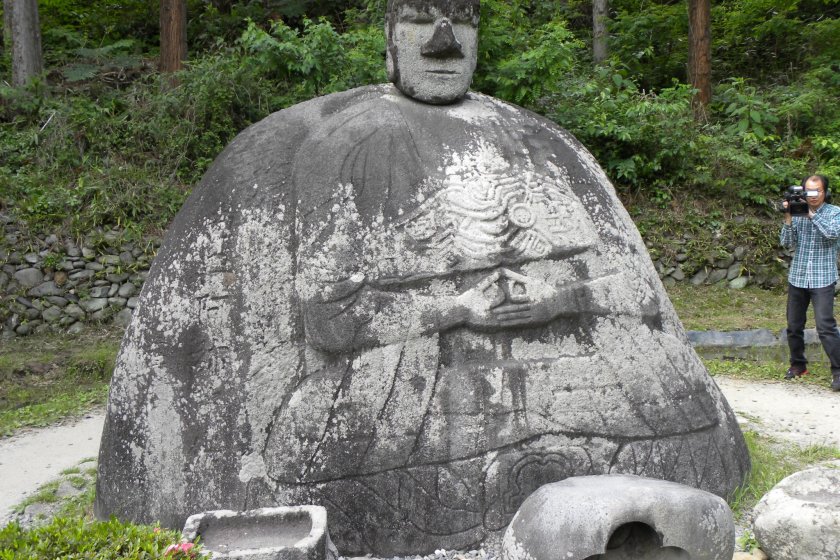 A giant statue of Buddha made of natural rocks

This is the Manji stone statue of Buddha

A simple rock statue of Buddha with a big nose is standing alone by a small rice paddy in the forest near the famous Suwa-Taisha Shrine in Shimo-Suwa, Nagano Prefecture. It is called Manji’s Stone Statue of Buddha (‘Manji no Sekibutsu’ 万治の石仏). It is composed of one big rock two meters high as its body and a 65 cm high stone head placed on the body. The unbalanced big nose in the face gives an exotic, humorous and even secular impression, but the engraved patterns on the body show that the statue represents Buddha. The era name of the Japanese calendar, Manji III, is engraved on its body, and so it means that this statue was created in 1660 AD. The existence of the statue had long been ignored and forgotten because of its strange and funny figure. It was discovered three hundred years later in the 20th century by famous novelist Jiro Nitta (1912-1980) who was born in Kami-suwa, Nagano-ken, and artist Taro Okamoto (1911-1996) who built the Tower of the Sun at the site of Expo '70 in Osaka.  Since then,  the existence of the statue has become widely known and many tourists visit there continuously these days. The stone head of the statue fell off in 1991, and it was placed back.

According to legend, a stonecutter was going to cut a huge rock to build a gate of the shrine. When he hit the rock, the rock began to bleed and the stonecutter was so astonished that he gave up cutting it. In his dream he was told to find another rock for the shrine, and his efforts succeeded. As he was so awed with the bleeding rock, he decided to deify it and make it into a statue of Buddha.  The scar made when the stonecutter hit the rock can still be recognized on its back even today.

This stone has become a hotspot among Japanese tourists. It's really fun for them to find and something different from other typical Japanese cultural attractions, though it is a genuine product of Japan and the Japanese. Enjoy! 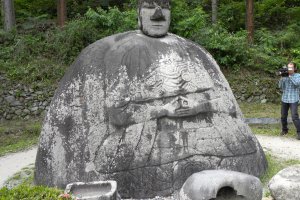 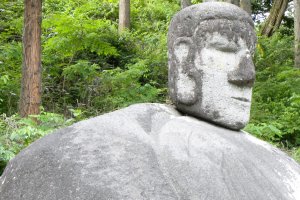 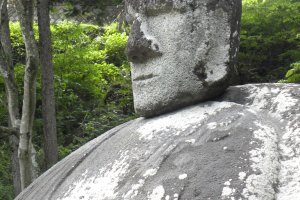 Elena Lisina a year ago
I've been there with my Japanese friends. All of us made three times around the statue and made a wish. They believed it would come true! :)
Reply Show all 0 replies

Corinna David 4 years ago
Good to know the story behind this statue of buddha.
Reply Show all 0 replies

Reiko Senna Author 6 years ago
I'm glad I could share my photos of something interesting.
Reply Show all 0 replies
5 comments in total