Home of the Wish Granting Buddha and Dragon Balls

“Okadera is the ‘Dragon Ball’ Temple,” a priest jokingly told me.

“Really? Then where are the 7 Dragon Balls? I’ve got some wishing to do.”

Okadera or “Ryugaiji,” Dragon Lid Temple, its proper name, is a Buddhist Temple founded in 663 by the Buddhist Priest Gaien. According to temple legend, there was a dragon causing mischief and harm to the people of the nearby Asuka Village. Gaien confronted and defeated the dragon, confining it to a pond. Gaien placed a large stone, the “Ryugai” or “Dragon Lid,” in the pond to prevent the dragon from escaping. Supposedly the dragon's heart was reformed by Gaien and it is now a deity of the temple. The Dragon Lid Pond (Ryugai-ike) and the dragon lid stone are extant on the grounds of Okadera to this day. Dragons are gods of water and weather in Japan and it is said that if the dragon lid wobbles or shakes rainy weather will soon follow. The Japanese Buddhist faith of cleansing oneself of “yaku” (bad spirits or unluckiness) was born at Okadera as an outgrowth of the dragon legend.

After the priest finished relating this story to me (and after several more Dragon Ball jokes), the priest led me over to a glass box full of small wooden balls branded with the kanji of Okadera.

“These are the dragon balls,” he told me. "They’re called, ‘ryutama’ or ‘negaitama’ in Japanese and the name means ‘dragon ball’ or ‘wish ball.’ Dragons have a ball near the end of their tail that they can use to grant wishes. Please make a wish, anything is ok. Okadera is a wish granting temple.” Each dragon ball has a lid (a mini dragon lid) tied to the ball with a red string, underneath the lid is a thin role of paper (a mini dragon) stored inside the dragon ball. Write your wish on the paper, put it back in the dragon ball and then hang it on a tree outside the main hall.

Wish made, I stepped into the enormous wooden Hondo or main hall, home of Okadera’s most important idol of worship, the Nyoirin Kannon Bosatsu, the Buddha of Wish Granting. The Nyoirin Kannon Bosatsu was constructed out of clay in the 8th century making it the oldest clay Buddha statue in Japan. It was brightly painted 1200 years ago, and the original colors can still be seen in the eyes and on the lips of the Buddha. Because of its size, age and significance Okadera’s Buddha statue is counted among the 3 great Buddha statues of Nara (the other two are the wooden Buddha at Hasedera and the bronze Buddha at Todaiji).

“A wish made with a true heart will be granted by this Buddha,” the priest told me. “Any wish is OK, but most people come to pray for health or recovery from illness.”

Besides the wish granting Buddha statue and and dragon balls, Okadera has a reconstructed 3-storey pagoda (the original pagoda was destroyed by a typhoon in 1472), a Niomon (guard deity) gate that was built in 1612, and the Shorodo bell tower and bell. The bell has 7 holes in it drilled by the Japanese military during WWII to check the grade of the metal (it was very nearly confiscated). The holes supposedly give the bell a more gentle sound, and it is believed that the bell’s wish granting power was increased by it’s not being confiscated for war. The maple trees of Okadera’s garden put on a fabulous display of autumn fire come November, and seasonal flowers make it a colorful place in April and October.

Despite there being a Kintetsu Line train station named “Okadera,” the temple is actually quite far from the station. Buses from Okadera and the nearby Asuka and Kashihara Jingumae Stations are available but it’s more convenient to rent a bike from Asuka Renta-Cycle and enjoy other sites in Asuka Village where Okadera is located. Need a wish granted? Want to learn more about Japanese culture and history? Just want to enjoy beautiful scenery? Okadera can do it all. It’s the Dragon Ball temple after all. Happy Travels! 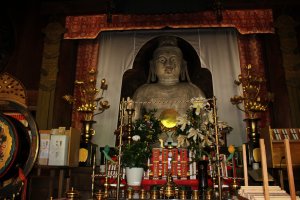 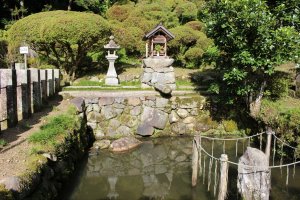 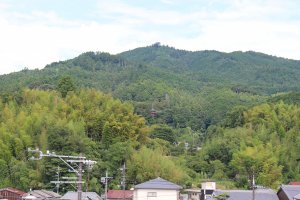 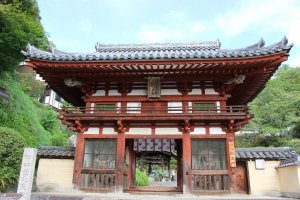 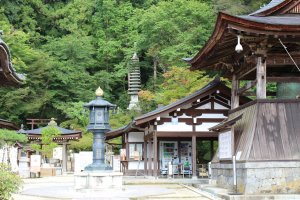 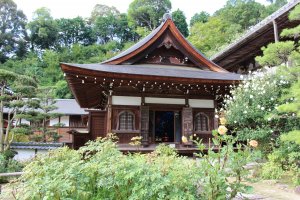 Justin Velgus 4 years ago
Funny story! Sounds like a great visit with much to look at.
Reply Show all 1 replies