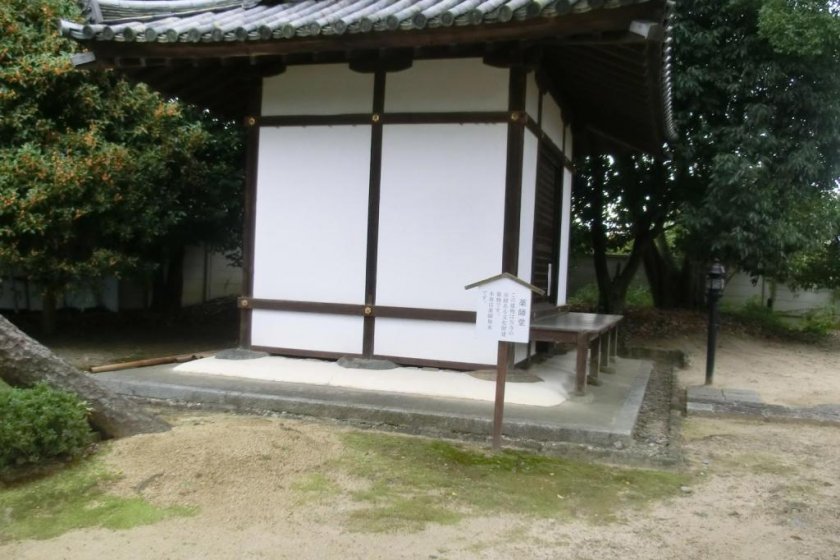 If you are interested in further exploring the Saidaiji / Heijo palace area on foot there are a number of walking courses that allow you to take in the most important sites in this area. The time needed to complete each course can range from two to four hours, depending on how much time you have, and your general level of fitness. The area around Saidaiji and central is all flat, there are no hills around so its possible for a reasonably fit person to complete each course in half a day or so. You will probably need a good pair of hiking or walking shoes, a small backpack to carry necessary items and if you travel in the summer months, a sunhat is advisable. In this article, I will introduce two possible walking routes (or even cycling- you can rent "mamachari" shopping bicycles at Yamato Saidaiji station) , one course beginning and ending north of the Kintetsu railway and the other heading southwards from Saidaiji station to Nishi-no-kyo station. The Hokkeji-Kofun-course covers about 9.4 kilometers or about 6 miles, and takes about 3 hours to complete.

This course starts at Kintetsu Shin-Omiya station, between Yamato Saidaiji and Nara station. If you are coming from Osaka or Kyoto get out on the left side of the train and go through the ticket gates, do not go over the rail crossing but turn left and head north. At about the fifth traffic signal turn left and walk to the end of the street and then turn right. You should come to a large temple complex with high white walls called Hokke-ji temple. This was a former nunnery and has a beautiful garden inside. The temple, which is located just to the east of the Heijo Imperial palace site and is about a mile from Nara park, was originally a convent built by the Empress Komyo in the seventh century as a center for all nunneries. The convent had been built as a principal residence by her father Fujiwara Fubito and remodeled into a convent. The Empress was an ardent believer in Buddhism and established the five story pagoda and the west edifice of Kofukuji in prayer for her late mother. The Empress was very merciful and looked after the poor and sick of the time and contruction of Hokkeji at that time was aimed at the liberty of women in general and she devoted her life to the development of Buddhism in the country.

Around the corner from Hokkeji is another temple called Kairyuoji temple. If you keep heading north from Hokkeji you should come to a large wooded area with a large body of water surrounding it. These are actually imperial graves called kofun. There are two or three of them in the area, one closest is called Uwanabe Kofun and the other on the left of it is called Konabe Kofun. In this area you will probably come across a large gate with guards standing at the entrance, this facility is the Nara base of the Air Self Defence forces. You can not enter the base unless on official business but this is also where the SDF Air Force officers are trained. Going past the Konabe kofun you should come across the grave of Emperor Heijo after which the Heijo Palace is named.

If you keep the Heijo Palace site on your left and the large wooded areas of the graves on your right, you head in a more or less north easterly direction towards Heijo station. There are some back streets but if you get lost you can always ask how to get to Heijo station. Going out the northwestern corner of the Heijo Palace grounds, head north to some more Kofun graves, There is a large park here with a moat, if you walk to the end of the street where the moat ends and then turn left you will walk down the hill towards Heijo. There are several small temples in the area, cross over the railway tracks just to the right of the entrance to Heijo station (you will see a side street and a crossing) and just north of Heijo station in a wooded area is another imperial grave of Empress Jingu. From the Jingu grave walk on the south side of the burial mound and the Nara Velodrome will come into view. It is a large yellow building and hard to miss. Walk towards the velodrome and on the western side you will see the bus parking area. Situated about 10 minutes walk west of Kintetsu Heijo station, it is possible to enjoy competition cycling. Check the Nara Keirin website to learn when and where events are being held.

Follow the left fork and after walking about five or ten minutes you will come to Akishinodera temple. The road to the temple is signposted and you may see many tour buses parked nearby so it’s hard to miss. Founded in 780 shortly before the royal court left Nara, the main temple is faithful to the original, and had many fine statues. Open from 9.30 to 16.30 it is enclosed within a grove of trees and bamboo and the stroll through the long access path to the temple is quite beautiful. The most well-known Buddhist statues among the 25 placed in the main hall is the standing statue of Gigeiten, the patron god of the arts, who is venerated by many artists. Akishino-dera was built around 780 at the request of Emperor Konin. It lost most of its buildings to fire during wars in the 12th century, and the present main hall was rebuilt in the 13th century. There is a wooded area in the grounds that stretches from the south gate, and the velvety moss-covered garden is tranquil, and beautifully arranged.

From Akishino temple head southwards about 500 meters in a straight line, go past the Lawsons to the first traffic signal, you can either turn left and keep going over the crossing and you will come into Saidaiji station. or If you go straight ahead of the signal you come to a railway crossing. This should bring you out just west of Yamato Saidaiji station on the Nara Kintetsu line. After crossing the railway line turn left at the second street on your left and you will reach Saidaiji temple. Located close to the busy Yamato-Saidaiji station, Saidaiji temple has a very quiet atmosphere once inside the temple walls. Located close to the bustling Yamato Saidaiji station it is a short three-minute walk from the station. As you approach the entrance to the temple, the massive walls surrounding the temple complex rise up before you and gives you an idea of its immense size. Entry to the temple grounds are free but as mentioned, an admission fee is required to enter some of the buildings. You can buy tickets to enter individual buildings but I recommend you buy a concession ticket, where for one price you can enter all four of the buildings using one ticket.

Places to eat and drink

From Saidaiji temple, it is only a three-minute walk to your final destination, Yamato Saidaiji station. There are also a lot of fast food restaurants in the Shin-Omiya and Yamato Saidaiji station vicinity also, including Kentucky Fried Chicken, McDonalds, Mr Donuts and Mos Burger. Nara Family department store in Saidaiji also has a food hall in the basement level as well as a restaurant floor on the 6th floor. If you would like to try traditional Japanese food the izakaya, Kuimonoya is close by Nara Family as well as Tenkaippin which is a famous ramen and noodle chain. Walk out of the main entrance of the department store turn right and Tenkaippin you will see on your left as you walk towards the traffic signals. Convenience stores are plentiful with one also on the road between Akishinodera and Saidaiji, about 5 minutes walk south of Akishinodera. 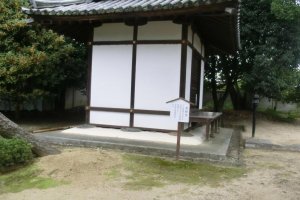 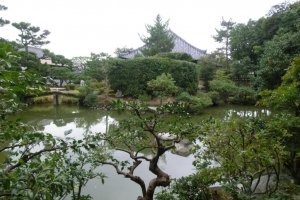 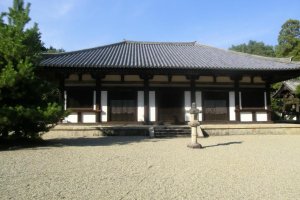 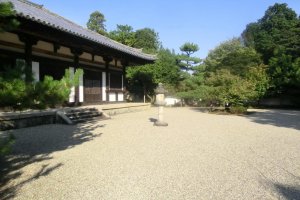 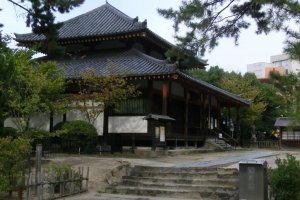 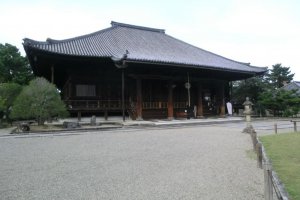