Enjoy the beauty of around 5000 plum trees in Nara

For those who enjoy the beauty of plum blossoms, Nara's Hirohashi Bairin is a great place to visit. It's known as one of the best plum groves in all of the prefecture, and the grounds are home to around 5000 trees which bloom from late February until late March. The plum blossoms also come in a range of hues and species, including single petal and double petal types.

On each Sunday during the month of March, the plum grove holds a festival which includes fun events like a stamp rally and numerous market stalls. There are also several walking paths around the grounds, allowing visitors to enjoy a hike while appreciating the fragrant blossoms. Admission to the event is free of charge.

Hirohashi Bairin is located around 20 minutes by bus from Shimoichiguchi Station, served by the Kintetsu Yoshino Line.

For those who plan to drive, there is a small parking lot at the venue. 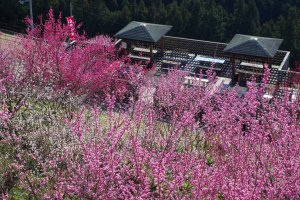 Kim Author 3 weeks ago
I like the really vibrant pink ume blossoms...I like them more than sakura!
Reply
2 comments in total