Power and pull of the primeval

Kasuga Primeval Forest is a dark place. This, however, only befits a forest left largely untouched in a near original, pristine state.

Shrubs, ferns and foliage run amok. Rocks and boulders strewn around proudly show their moss covered age, as do the thick canopy of trees, worn and torn, but still towering high and still growing. There is no gussying up to look good. It is as it was.

A Nara World Heritage site, the forest dominates a good half a kilometer stretch behind the Kasuga Taisha. An Emperor Ninmyō prohibited chopping of the trees and hunting in AD 841, as the forest was and is the sanctuary of Kasuga Taisha. For some, Kasuga Forest is the shrine, and Kasuga Taisha was built to honor the Gods that dwell there. This includes the God who protects Nara’s deer, although he should probably stop.

The public weren’t allowed anywhere near until after World War Two. A walking trail now allowed me the rare experience of being in a primeval forest.

When I looked at how the old trees still survive, literally against all odds, such as time, the elements, I could feel the power of the forest's strength of survival. Juzo and kami shrines dotted my walk, left behind by Buddhist monks who used the Forest as their training ground in days of old. Together with its allegiance to Kasuga Taisha, I felt the magnetic pull of the Forest's venerable history and religion.

All this permeates the atmosphere of the walk. You're not just looking at one or two ancient trees here. You're looking at, and immersed in the power and pull of an entire forest. They evoke a time when nature was sacrosanct in a time when it is not.

Many trees hung precariously on the edge of the mountain slopes, their roots already bared, still upright, as though resisting till the end. Some have succumbed, for there are warning signs about falling trees and branches.

Some trees lay crushed across a brook, or at the bottom of a ravine, like warriors who have lost a battle. Some trees still tenaciously pushed their way through rock. I guess like human beings, surviving for a long time is no joke.

Kasuga is also a naturalist’s dream. The word must have gotten round to the birds and bees, insects, flying squirrels and butterflies that the left-alone forest with over 175 types of trees and around 800 species of plants, was a pretty good place to hang out.

If you don’t want to walk, you can still see some of the forest by the edges of the part of Nara Park that leads to Kasuga Taisha, continuing along the Stone Lantern walkway to Kasuga Taisha. The forest here is however cordoned off. But I stepped onto the Nara Park part of this walkway - no cordon - where I discovered a segment of the Forest deeper inside. There were no signs there telling me to keep out, so I was able to walk around a bit in primeval enjoyment.

Kasuga Primeval Forest is the least visited of all Nara attractions. Wakakusayama Hill next to it had a bunch of people, including a bride at the summit shivering in her wedding dress.

I followed the map of the trails, with distance and timings, available from the very good Nara Visitor Centre and Inn. You can locate it on a tourist map of Nara. Look for the Kohfukiji Temple area. Then go to your right.

I used the South Toll gate (see map of the walking trails) to go up to the top of Wakakusayama. From there, some senior walkers showed me how to join up with the Kasuga Trail. - with your back to the city, look for a pathway going down, and follow it all the way. Keep walking until you come to a guard post. Turn right here for Kasuga Shrine and the way out.

As I was walking, a Japanese walker hailed me and then continued on. I could see him looking back to check for me. Most wonderful, there were cross roads and turnings in Japanese, and he was waiting to make sure I got the right one.

That’s the blessed thing about walking in a Forest of Gods. There are always angels around. 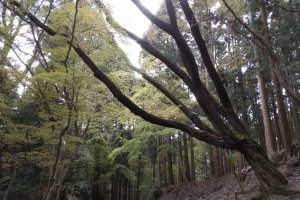 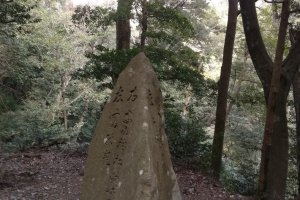 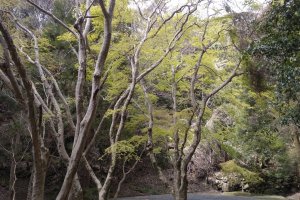 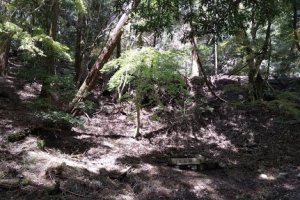 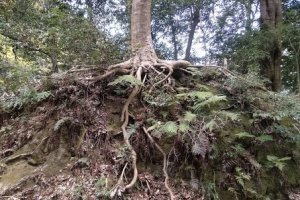 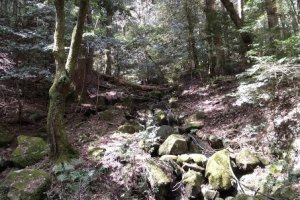