Shrine of colors in Nara Prefecture

Tanzan Jinja, deeply set into the Sakurai Mountains in Nara prefecture, is a shrine well-known for its dazzling autumn colors and luminous, red buildings. Autumn in Japan is known worldwide for its momijis, red maple trees which color in a variety of nuances including yellow, red, and orange. The bright colors glisten in an azure, blue sky, marking a strong contrast with the surrounding mountains. The colors are complemented well by the invigorating, pure air of the mountain to create a strong spiritual feeling.

Tanzan Jinja was built in 678 by priest Jokei, son of Fujiwara no Katamari, to whom the shrine is dedicated. Fujiwara no Katamari was the founder of the famed Fujiwara clan. The first shrine was originally composed only of the tall pagoda, standing tall in the reddening mid-autumn colors. The shrine we can see today, however, was re-built in 1532, during the Muromachi period, and is 17 meters tall.

The history of the shrine was part of an essential episode of Japanese history, the Taika reforms. The reforms, decided after the 645 coup d’etat, allowed the Japanese imperial system to strengthen by creating a centralized government after the collapse of the Tang Imperial System. This empowered the emperor and allowed Japan unification which was divided between many rival clans up to then. The Tanzan Jinja has a deep link to that period, because it was on Mount Tonomine that Fujiwara no Katamari and Prince Naka no Oe, future emperor Tenji, deliberated and decided on the 645 coup d’etat. They decided to dethrone Soga no Iruka, leader of the Soga clan who had had a great amount of power in the imperial court for over 50 years. Soga no Iruka was eventually killed by the plan hatched here in the Ishin incident, which open the way to the throne and greater power for Emperor Tenji.

At the entrance of the shrine, you can find several small stands with a large variety of local products: persimmons in autumn, cakes, grilled mochi (rice paste cake) stuffed with red beans paste, or narazukes (pickles marinated in sake, a specialty from Nara prefecture).

The shrine is composed of various buildings, each standing out in its own unique way. Among them, the Haiden, a prayer hall, has a beautiful terrace decorated by traditional lanterns and wondrous views on the surrounding mountains. Visitors may walk the mountain where Fujiwara no Katamari and Prince Naka no Oe deliberated the change of power after playing a game of kemari. The place they met is situated under a large tree, in a forest of cedars, 10 minutes walk from the shrine. On the way is a “power spot”, namely a mountain stream falling on rocks, which is said to empower and revive the mind.

In April and November games of kemari, a traditional game played with a ball made of deer leather, are held in remembrance. The players wear traditional Heian period clothing at this occasion to commemorate the the source of the creation of the shrine.

The shrine is not only well-known for its spectacular autumn colors, but also for the cherry blossom viewing in spring. It’s a wonderful and culturally rich experience and a strong recommendation for spiritual refreshment.

Access is convenient, with a direct bus to Tanzan Jinja from Sakurai Station. 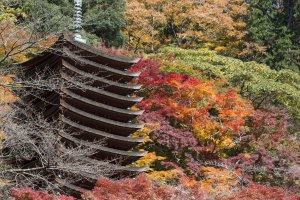 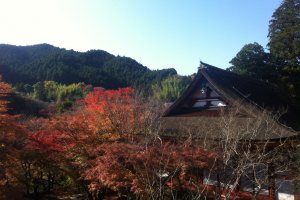 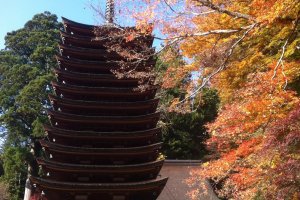 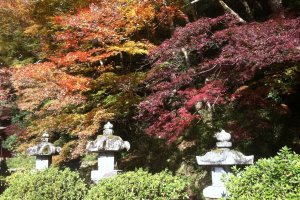 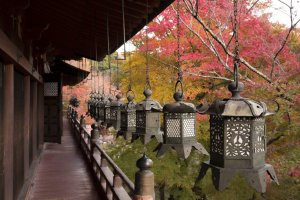 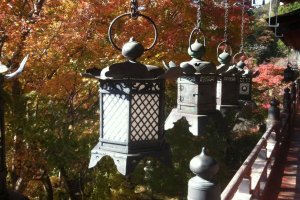