The most beautiful mountain shrine in Japan?

The view of the Yamato Valley became more and more expansive as the road climbed higher up Tonomine Mountain. Rice paddies climbed the increasingly steep slope in a green and brown staircase growing in grandeur with every tier. The road reached the peak of the mountain and a small driveway veered off to the left and disappeared over a slope that appeared to tumble into a column of autumnal fire. A canopy of orange and yellow sakura tree leaves made a spectacular roof for my destination’s dirt parking lot. The view of red shrine buildings and their tiled rooves rising above of a boil of orange, red and yellow trees ignited my awe again and commanded a liberal use of my camera.

Tanzan Shrine in the mountains between Sakurai City and Asuka Village in Nara Prefecture was founded in 668 to honor Fujiwara no Kamatari, a powerful courtesan who helped enact the Taika Reformation that returned power of government to the Emperor. Fujiwara’s remains were enshrined in a 13-story pagoda (the most levels of any pagoda in Japan) and a statue of him was enshrined in a prayer hall next to the pagoda in 701. The beauty of the location and the shrine earned it many honors and distinctions from the Emperor Daigo and Emperor G-Hanazono in the 9th and 15th centuries. Many important or culturally significant pieces of artwork, documents and artifacts are held at Tanzan Shrine and fifteen of its structures, including the main hall at the 13-story pagoda (a 1532 rebuild of the original 7th century structure) are designated as Important Cultural Properties and National treasures. The combination of the mountainside location and graceful historic structures may make Tanzan Shrine the most beautiful mountain shrine in Japan. The beauty is at max force in the fall when an abundance of Japanese maples and a variety of other deciduous trees turn fiery all at once from the middle to the end of November resulting in a spectacular feast for the eyes. One can’t turn around without beholding another jaw-dropping bit of autumnal glory. The slightly remote location also reduces the number of visitors making a a trip to Tanzan Shrine all the more enjoyable.

Tanzan Shrine is located in Sakurai City in the center of Nara. Sakurai Station is served by both JR and Kintetsu Trains. Eight to ten buses a day run from the south exit of the Sakurai Station to Tanzan Shrine. The fare is ￥490 each way. Board at bus stop number 1. Alternatively, one can take a Kintetsu Line train to Kashihara Jingumae or Asuka Station, rent a bicycle (or 50cc scooter for those holding an International Drivers Permit) and ride about 6km up Tonomine Mountain to Tanzan Shrine. This latter option will require some tough uphill biking but rewards riders with spectacular views of the terraced rice paddies of Asuka Village and grants access to the other sites of Asuka. 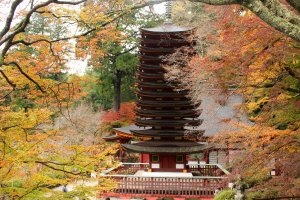 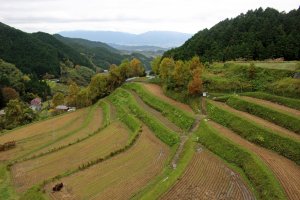 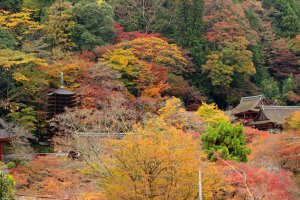 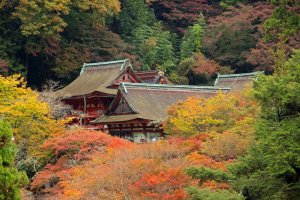 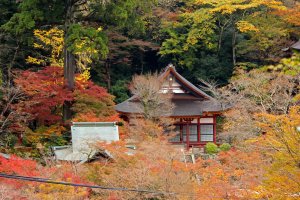