Free transportation to and from Asuka, Japan’s oldest capital? Ok!

It’s offered by the new NARA Visitor Center & Inn in Nara City in the form of the Nara Excursion Bus. The service began on July 24th and operates Tuesdays, Thursdays, Saturdays and Sundays through October 31st of this year (services next year are being decided). The inaugural bus (and all future services) left the Visitor Center at 9am. Riders have the option of going to either Asuka Village or to Yoshino. As Asuka has a 10:20 drop off and 4:15 pick up time giving visitors more time to explore (Yoshino’s drop off and pick up are at 11:05 and 3:30) I elected to go to Asuka.

The Asuka drop off is at the Ishibutai (stone stage) bus stop right next to the stone tomb the bus stop is named after. One doesn’t have to travel to Egypt to see the tombs of Kings, Japan has them too, and the oldest ones are in Asuka. The Ishibutai Tomb (￥250 entry) was constructed in the 7th century from 30 monolithic stones. The two largest stones that make up the roof weigh 60 and 77 tons respectively. The Total weight of all the stones combined is upward of 2200 tons demonstrating the high level of technological advancement Japan possessed even in its infancy. To stand in the cavernous burial chamber is to realize the dream of the rock fort every boy thought he would build when he was 7 or 8 years old. Time, weather and grave robbers have erased certainty from the Ishisbutai’s origins but there is some written evidence to suggest that the Ishibutai was the tomb of Soga no Umako, the powerful 6th and 7th century courtesan credited with introducing Buddhism to Japan. Though he was not an Emperor himself, Soga no Umako married his daughters into the Imperial household securing himself enough influence to command a structure like the Ishibutai be raised when he passed away.

Using my smartphone and the asukanavi.jp website I saw that Asuka was spread out enough that walking would not allow me to see all I wanted to see before the bus came back. Asuka has a local bus service but a green sign across the street from the bus stop that said, “Rent-a-Cycle” in Japanese caught my eye. One signed user agreement, a ￥900/day rental fee, and a ￥400 mixed fruit and frozen yogurt from the Log House restaurant later I was on wheels and following the AsukaNavi out into the countryside toward the tanada terraced rice fields. The multispeed bike dealt with the undulating countryside easily and I very quickly found myself in the postcard scene of the terraced rice fields. One could spend a long time composing postcard photos from anywhere among Asuka’s tanada or just standing, strolling or leisurely riding in the countryside.

AsukaNavi in hand, I rode from the tanada past the Ishibutai to Okadera Temple. Its proper name is Ryugaiji, or dragon lid temple and supposedly the founder of the temple conquered a troublemaking dragon and confined it to a pond on the grounds. Wish granting dragon balls, no not the 1 to 7 star balls from the anime, but wooden ones with a piece of paper for writing a wish on inside, are available to anyone as is the 1300 year old Nyoirin Kannon Bosatsu, a clay wish granting Buddha, Okadera’s principle idol of a worship. I made several wishes using a dragon ball (￥600) and prayers to the Buddha. None have come true at the time of writing but they were complex in nature so perhaps they require more time?

Down the hill and a kilometer and a half into the rice paddies from Okadera is Asukadera, the oldest temple in Japan. Buddhism in Japan started here. Fires and the tides of politics and time have reduced Asukadera from its original size, but the bronze Buddha statue in the main hall has endured all of history’s tests and remains Asukadera’s principle idol of worship. Asukadera’s Buddha was constructed in 609 at the behest of Soga no Umako by a Buddhist sculptor from Korea. The statue reflects Asian mainland features indicating the origin off the sculptor’s practice and experience (the Buddha at Okadera reflects Indian features). It’s considered the genesis of the art of Buddha sculpting in Japan.

Time was beginning to run short after I visited Asukadera. I made a very quick jaunt across the rice paddies and up the hill to the viewing platform at Amekashino-oka. The view over the Asuka and the Yamato Valley was spectacular and I wish I’d had more time to enjoy it. I was able to get the pictures I wanted and then make the 3.5km ride back to the Ishibutai Bus Stop to return the bike and catch the bus, which in true Japanese fashion picked up on time in Asuka and arrived back at the Visitor Center around the 5:30 return time on the schedule. It was a great day out and an excellent way to explore a core swath of Japan’s most ancient capital. 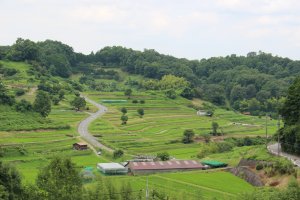 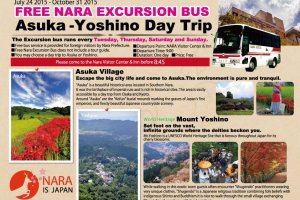 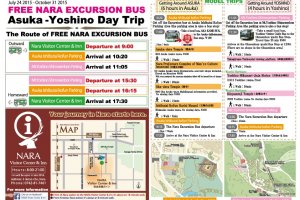 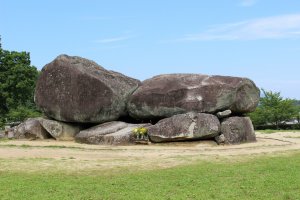 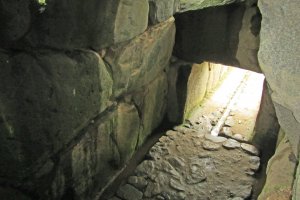 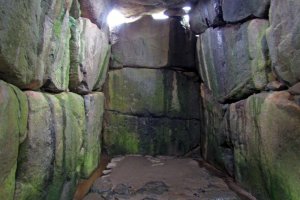