There are plenty of ways to get to Japan’s northernmost island of Hokkaido, but the quickest and most convenient of these is almost always going to be by air. If you are ready to explore the beautiful areas the island has to offer, make sure you get started in the right area.

While there actually 13 Hokkaido airports, we are going to cover six of the major ones to get you to the cities, ski slopes, and national parks. Some of these airports have international flights, but for the most part, you will likely be coming in from a major domestic airport such as Tokyo or Osaka.

We will start out with the three largest and most trafficked airports in the area: New Chitose Airport (CTS), Hakodate Airport (HKD), and Asahikawa Airport (AKJ).

Located in the Chitose region of Hokkaido and serving the Sapporo metropolitan area, New Chitose Airport is the largest airport in Hokkaido by both traffic and land area. With several direct international flights, New Chitose Airport is often thought of as the gateway to Hokkaido. Not only is it the gateway into Hokkaido, but it will also frequently connect to smaller airports on the Island such as Hakodate, Kushiro, Rishiri, Nemuro Nakashibetsu, and Wakkanai Airport to name a few.

As the largest airport on our list, there are many activities to do without even touching on the city of Sapporo, Hokkaido’s largest city. You will be able to find plenty of shopping, dining, entertainment (theatre and play), and relaxation (onsen, lounges, hotels, massage) while you wait for your flight. The area is highly accessible for the disabled and conforms well for visitors with small children as there is a nursery and stroller rental surface available. Foreign exchange and international tour desks are also available throughout the airport.

Sapporo itself is the capital and largest city in Hokkaido famous for its beer, skiing, and annual Sapporo Snow Festival just to name a few.

Hakodate Airport is located just east of Hakodate and has domestic routes operating between Tokyo (Haneda), Osaka (Itami), Nagoya, and Sapporo, with international routes to Taiwan and seasonal operations to several Chinese cities.

The airport has a wide variety of retail stores and restaurants to choose from. As would be expected from the city known for fresh seafood, local seafood dishes abound alongside other Japanese, Chinese, and Western-style dishes. A few recommended restaurants include Restaurant Pollux, Onjiki, a restaurant specializing in Hakodate-style ramen, and a branch of Misuzu Coffee, Hakodate's oldest coffee store. Other amenities at the airport include foreign currency exchange and an information counter where you can obtain details on flight schedules, sightseeing spots, local accommodation options, and transport information.

For those who are traveling with children, you'll be happy to know that there's a kids corner on the 3rd floor of the Domestic Passenger Terminal Building, with areas to slide, climb, and crawl. For the bigger kids, there's a game area with UFO catchers, taiko drums, and even purikura photo booths.

Hakodate is a harbor city in southern Hokkaido full of Western influences and a dazzling mountaintop view overlooking the city. Hakodate was one of the country's first ports opened up to international trading along with Shimoda back in 1854.

Hokkaido's Asahikawa Airport (airport code AKJ) sits roughly in the center of the prefecture and is served by various domestic and international routes. On the domestic front, flights are available to and from Tokyo's Haneda Airport and Nagoya's Centrair Airport, with seasonal routes to Osaka's Kansai and Itami airports. As for international flights, there are seasonal routes to Korea (Incheon), China (Beijing and Shanghai), and Taiwan.

The airport has several amenities that are helpful for international travelers, including a currency exchange machine, a duty-free store, and a prayer room on the third floor. There are a number of restaurants available, serving a host of Japanese and Western dishes, and one restaurant named "Tiffany" serves some halal-friendly options. For parents traveling with children, there is a nursing room on the second floor, and there are baby changing stations conveniently located throughout the terminals. Coin lockers are also plentiful, and during the winter months, they have lockers that can accommodate your ski and snowboarding gear.

The airport has a host of car rental companies if you plan to self-drive on your exploration of the area - you have your pick of Toyota, Nissan, Nippon, Times, Orix, Honda, and World Net rent-a-car. Parking is also available at the airport - it's free for the first hour, and then charged at 100 yen for each hour thereafter, up to a maximum of 500 yen per day.

The region is popular for its proximity to the flower fields of Furano in summer, a range of winter sports in the colder months, and the Asahiyama Zoo, often regarded as one of the country's best zoological facilities.

Located in eastern Hokkaido, the Tokachi Obihiro Airport offers multiple daily services to and from Tokyo's Haneda Airport. There are also seasonal routes that operate via Japan Airlines to Nagoya's Centrair Airport.

The airport terminal spans over three floors, with the first floor for check-ins and arrivals, the second floor for departures, and the third floor consisting of an observation deck area and conference rooms. Despite being a smaller regional airport, there is still a host of shopping and dining options, many of which have a focus on locally-sourced products. The Heartfield Restaurant serves up salmon roe bowls, ramen, and other set meals, and the Heartfield Cafe is perfect if you need a cup of coffee (or even a beer!) before you board your flight. As for the retail stores, Rokkatei specializes in seasonal Japanese sweets, puddings, and baked goods, Kojima is great for folk crafts and souvenirs, and Fujimaru offers a range of foods that represent the region.

If you're traveling through this airport with young children, the second floor has a play area which is perfect for toddlers. There are soft mats for them to crawl on, play equipment, and plenty of books, allowing time to speed by before you have to board.

For those who plan to continue their adventures in this part of Hokkaido by car, there are car rental company counters on the first floor of the terminal building.

Kushiro Airport is located in eastern Hokkaido, and serves as a gateway to the impressive nature and wildlife that can be found in this region of Japan. The airport has routes to Sapporo (both New Chitose Airport and Okadama Airport), Tokyo (Haneda and Narita), and Osaka (Kansai and Itami), There is also a seasonal route to Nagoya's Chubu Centrair Airport.

The second floor of the airport is home to several retail stores selling a range of different local foods, drinks, and handicrafts. There are regional sake and wine varieties you can purchase, right through to dairy and seafood products. Also located on the second floor is Shine Bless, a wellbeing store where you can get massages and facials for some relaxation before your flight.

There are two restaurants situated on the third floor - Hokuto focuses on Japanese cuisine, and their signature dish is soup curry, a Hokkaido specialty. There's also Restaurant Tancho which offers a number of dishes that use locally-sourced ingredients. Aside from the appeal of the locally-sourced ingredients, the windows at Restaurant Tancho look out over the runway as planes arrive and depart.

For those who arrive at Kushiro Airport and want to explore the region by car, there are a number of rental companies to choose from. The counter can be found on the first floor, just outside the arrivals lobby. For parents, there's a nursing room located on the second floor.

Memanbestu Airport is situated in Okhotsk subprefecture, Hokkaido, and offers air connectivity to Tokyo, Sapporo, Osaka, and Nagoya. The region is rich with nature activities, and Memanbetsu is the closest airport to the Shiretoko National Park as well as the city of Abashiri, famous for its wintertime drift ice cruises.

Visitors will find a tourist information center on the first floor of the airport, which contains a host of information about things to see and do in the surrounding area. There are a number of small retail stores and also a 7-11 if you're needing to pick up some souvenirs or snacks, and a couple of restaurants if you'd prefer a sit-down eating experience. Restaurant Pirika offers some home-grown Hokkaido favorites like Genghis Khan (lamb barbecue) and kaisendon, or seafood over rice, among other offerings. There's also Okushiba Shoten which specializes in soup curry, the perfect warming meal for those chilly Hokkaido winters.

The airport has regular bus connections to Kitami and Abashiri, as well as seasonal buses available to Shiretoko and the Bihoro Pass. Details about bus timetables can be found on the airport's website (in Japanese) or at the tourist information center on the first floor.

If you plan to continue your journey in the region via rental vehicle, there are a number of car rental companies available in the first-floor arrivals lobby including Toyota, Nissan, Times, and Nippon Rent-a-Car. There's also a taxi rank at the front of the airport building. 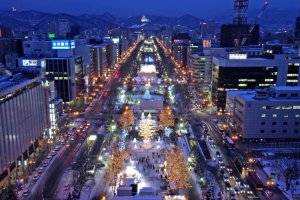 Novia Mardasari 4 months ago
Good idea to Hokkaido by Airplane and good experience by Shinkansen also ;)
Reply Show all 0 replies

Kim 4 months ago
Super convenient, with all the airport access - definitely gives you an appreciation of just how big Hokkaido is!
Reply Show all 0 replies

Sander van Werkhoven 4 months ago
Despite the vast distances at Hokkaido, so far I only used Chitose and Memanbetsu airport.

I do like Chitose quite a bit, when waiting for your flight there's more than enough to do. Not just the usual shops and restaurants (which there are A LOT!), but even more because of things like Royce' Chocolate World (https://www.youtube.com/watch?v=XHakIahZXFM) or the Steiff Discovery Walk. Kids will certainly enjoy the Doraemon and Hello Kitty areas. And if you have enough time, there's even a cinema! Probably one of the best airports to spend a few hours!

I can't say much about Memanbetsu Airport, other than that in my experience it was extremely efficient. I visited it in winter but they know how to handle rather extreme amounts of snow. I got my luggage in just a few minutes, and the bus to Abashiri was already waiting. I don't think I spent more than 10 minutes at the airport....
Reply Show all 2 replies

Bonson Lam 4 months ago
Wow, great to know. I didn't know there was a cinema in Chitose. Great idea!
Reply

Sander van Werkhoven 4 months ago
And maybe even better: there's also a pretty great looking onsen (even with rotemburo!) right next to the cinema! I totally forgot about that one....

Unfortunately I only had a departure from Chitose just once, the other times I left Hokkaido by train. And after an arrival, I usually don't care about anything at an airport, I just want to get my luggage, some onigiri and then go straight to my hotel....
Reply

Bonson Lam 4 months ago
Great idea to fly in one airport and fly out from another. A very efficient way to see Hokkaido
Reply Show all 0 replies
6 comments in total