Zen and the circle of life

It didn’t cross my mind that humans and fish can really connect on a deeper level, but after tracing the footsteps, or should I say, the swimming tracks of the salmon in this nursery, I have cause to change my mind.

This may be an ordinary looking building in an everyday part of Hokkaido, but its very modesty taught me so much about life and our outlook on it. On entry we were given a small playing card showing a picture of a White spotted Charr, a fish that I have never heard of before. Little did I knew, it was a predator of the young salmon, along with the rainbow trout, the brown trout, the Slaty backed gull, the Goosander and the wrinklehead Sculpin, the latter a grey and brown beast with a tusk like looking horn that no Pixar animator could have imagined. If my little three inch baby salmon can makes its way past its five nemesis on its two year and 4000 km trip between the feeding grounds off the Sakhalin peninsula and the home of the Kwakiutl off Vancouver Island, it then have to defend itself against the aptly named Salmon Shark, the seal and sea lion, dolphins and killer whales, brown bears as well as human beings, both recreational and commercial fishers in their thousands. It is not surprising then that only 1 per cent survive its transcontinental voyage, and when they do return after 3 years to the Chitose river, it is with joy that they are welcomed for their homecoming at this Salmon aquarium, much like an astronaut who survived a trip to Mars and back.

The scientists here do everything possible with their breeding program to maximise their survival rate, with a wisdom and positive attitude that is seemingly incongruous with their chances of returning alive. Of course, their very life supports creatures large and small across the North Pacific Ocean, as well as millions of human beings from around the world, giving us joy, health and an inspiration far beyond their finger sized creations when they leave the inconspicuous Chitose River. Even if you have never eaten salmon, by holding the picture card of the White spotted Charr on the entry to the museum, we affirm ourselves as the masters of the created world. Having been to a lion Safari in my youth where I was the hunted, it is both humbling and reflective to think that I am now on the other end of the animal kingdom, one that made me think of my responsibility to care for nature and to appreciate the smaller creatures in this aquatic safari. When looking at them closely you can see the markings that make them so special. Even its nemesis, the White spotted Charr, looks like the whale shark in its spots close up, one that Japan Trans ocean Air has played tribute to with its special livery. Actually when i look more closely at my baby salmon, I can see and feel their connection to me, looking at me as I talk to them and seeing them alternatively coming and going away as I point my camera to their giant eyes, ones that is inquisitive and sensitive at the same time. Perhaps after a few years here, it is not surprising that even the host looks like a salmon, I feel he has really channelled the spirit of the salmon, with his passionate storytelling of his lifelong love and adventure with these beautiful and brave creatures. So when we were given the chance to give life, by releasing the pair of baby salmon, it felt like a baptism and a sending off ceremony for the start of the school of life all rolled into one.

I don’t know if I will return to Hokkaido again, let alone see these beautiful creatures again, so it was time to pray for their health and to give thanks for their life, one that was lovingly supported by the kind hearted volunteers those eyes I only met for a moment. An unique part of this aquarium is the Chitose River road, a row of underwater observation windows where you can see the baby salmon that you released swimming around and building their strength here before heading to the open ocean in May for the rich nutrient waters to the north of Hokkaido. We may be in awe of the giant creatures in the sea, but there is so much to learn from the little creatures too.

Note - The Salmon fry (baby salmon) release season is only from March to May each year. School groups can book in advance for the period from March to June.

Located in an ordinary looking building in an everyday part of Hokkaido, it is a ten minute walk from JR Chitose Station, and approximately 20 minutes from New Chitose Airport. It is approximately 60 minutes from Odori Park in Central Sapporo, which will be the starting point for the 2020 Summer Olympics Marathon. 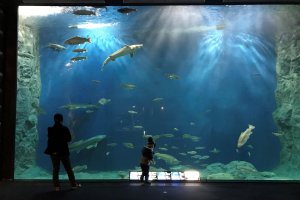 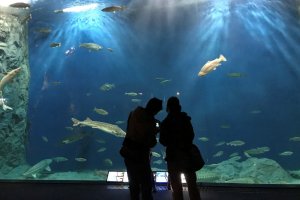 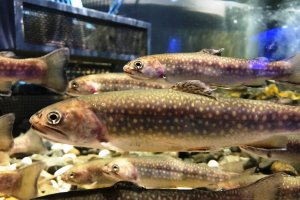 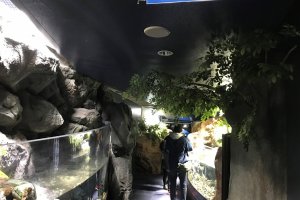 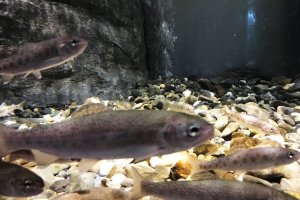 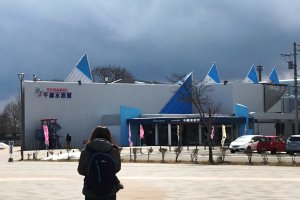 Sherilyn Siy a year ago
Sounds like you had an amazing and almost spiritual experience about the interconnectedness of life.
Reply Show all 1 replies

Bonson Lam Author a year ago
Yes, I am not usually so affected, but it really brought a sense of wonder and connectedness in me that lasted for days.
Reply
2 comments in total