A summer festival in Yuzawa

On August 6, I was invited to Echigo Yuzawa to attend a local festival. As the region is famous and most busy during the winter months, the Echigo-Yuzawano no Omatsuri was organized by local residents to promote the town and local businesses during summer.

As I reached Yuzawa Station, I was already able to see that there were huge crowds of people which was pretty unusual during summer time. From the station, we walked down towards the venue which is also known as the onsen streets. There we started seeing stalls with foods, drinks, toys and more. There were bands playing their instruments on the side of the roads, so we listened to them for a while. There were bands playing saxophones, and bands who performed rock songs, and we really enjoyed all of the performances. There was also a stall which had lots of baby koi fish, and you could pay 100 yen to play a fishing game. It was really interesting because it was harder than I previously imagined.

There were also dances performed by various groups, so we watched them dance in their unique costumes. One of the people who was watching the dancing informed us that some choreography was based on local traditions in the area and some were based on wider Japanese traditions. People were free to join in with the dancing, and it was surprising to me that those who joined in knew the exact steps!

We walked further down and visited a stall which was serving grilled pork (yakiniku). We were amazed to see the quantity of the meat for 500 yen. We bought one each with a glass of draft beer which was priced at only 300 yen. We have visited a lot of places in Japan but were especially glad to find a place finally where we could have good food at such reasonable prices.

This was a really good experience for me as a foreigner residing in Japan. I was able to become more familiar with the traditions, foods and especially with the locals of this area. 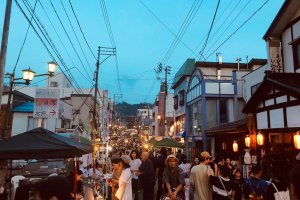 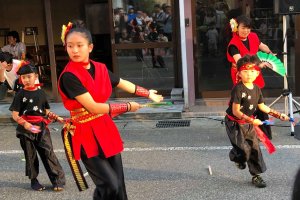 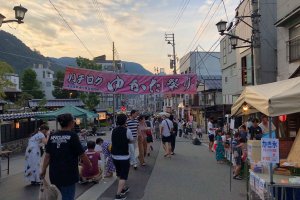