A fun way to catch our supper!

In late October, the weather was very pleasant and the sun was shining, so it seemed like a perfect opportunity to visit the Yuzawa Fishing Park. I'd never been fishing before, so I was excited and hopeful I'd have the chance to catch something. The fishing park is approximately 15 minutes from Echigo-Yuzawa Station, around the Iwappara area.

When we reached the fishing park, we saw many people, especially children, who were fishing in the designated area. It was a very calm and pleasant environment. The fishing area is beautiful, with man-made steps along the river and interconnected pools joined by bridges.

We paid for our admission at the counter and in exchange, we received some tickets. We took the tickets to a stall and showed them to the staff, who provided us with a long rod made of bamboo with a length of fishing line and a hook attached. They also gave us nets to keep the fish we caught and a matchbox-sized container filled with worms to use as bait. As it was my first fishing experience I was watching and learning from what my friend, Koji-San, was doing. He hooked the worm on the rod and then cast it into the river. After a few minutes, he caught his first fish, a medium-sized trout. I was pretty amazed to see it caught on the hook. After removing the hook from the fish's mouth, he popped it in the net.

Then it was my turn: he told me to try and catch something myself. I went ahead and hooked the worm, and cast the rod into the river where I could see plenty of fish swimming. After a few minutes, I felt something pulling my rod and realized that I had caught a fish! Without further ado, I pulled the rod out and saw another medium-sized trout. As Koji-San had done earlier, I slowly took the hook out of the fish. The hook came out so easily that the bait was still attached, and I was immediately able to fish again.

From my experience at Yuzawa Fishing Park, I learned that fishing isn’t as easy as it seems. It requires lots of patience and a solid technique, and I was glad I had the opportunity to work on those skills. If you’d like, the fishing park provides staff who assist in gutting and skewering your catch so you can grill it at the venue. As we visited late in the afternoon, we opted to bring the fish home and enjoy it with drinks as our supper.

The fishing park is approximately 15 minutes from Echigo-Yuzawa Station, around the Iwappara area. 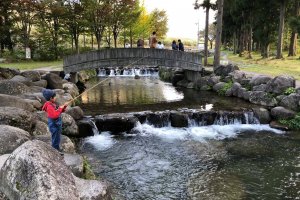 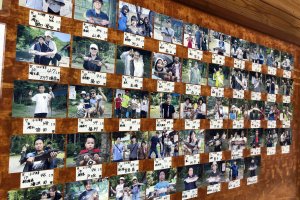 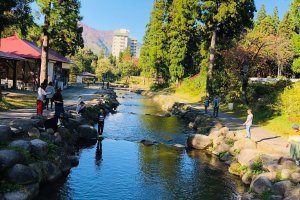 Lynda Hogan 9 months ago
Fishing parks are so much fun. This looks like a great one.
Reply Show all 0 replies

Kim a year ago
I want to visit! Great photos - looks like a nice family friendly day out!
Reply Show all 1 replies

Gaurav Raja Dahal Author a year ago
Yes it was kim! Thanks to the wonderful weather that day
Reply
3 comments in total