An animal adventure in the middle of Oita prefecture

There's admittedly a hint of Jurassic Park in the massive entrance gate to African Safari Park in the grassy hills of Oita prefecture, a short drive west of the hot spring mecca of Beppu. While it might seem rather odd to come across a park sporting African creatures in eastern Kyushu, this is one of Oita's top attractions and a hit with the under 12 crowd of any nationality.

The African Safari Park is a sprawling complex with several animal-related activities on-site. However, the petting area and the cat and dog houses are worth a miss, unless you don't have much interaction with farm or domesticated animals. The highlight of the park is, obviously, the safari itself. Supposedly, you can drive the park yourself but you'd miss out on the fun of the Jungle Bus, a large (and carefully caged) vehicle in the shape of different creatures of the savannah.

For the price of your bus ticket, each paying participant (under 6's are free, but must sit on an adult's lap) is handed a food tray with a variety of morsels for the animals. An explanation in Japanese will clue you in to who eats what, but if you can't understand, just copy your neighbors or let the animals "tell" you. (They'll refuse any other treat beyond their own typical offering.) As carnivores are also fed, visitors are only permitted to pass the food out of the vehicle using a pair of long-handled tongs

To keep things harmonious, the herbivores and the carnivores are kept in separate areas. Large double metal gates (a la Jurassic Park once again) keep any accidental encounters from happening, though the final area does house both cheetahs and zebras in the same zone. Happily, unlike many animal parks around Japan, there is ample room for all creatures. While feeding the elephants we could just barely spot the giraffes over the next hill and there was plenty of space all around for the animals to wander.

The only downside of the African Safari Park is the price, with adults having to pay ¥2500 just to drive through the entrance gate. If you opt for the Jungle Bus, it's an additional ¥1200. The best suggestion is to look for discount or combination transportation/admission tickets on offer at the Beppu Office of Tourism. 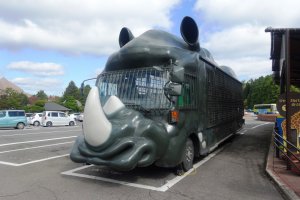 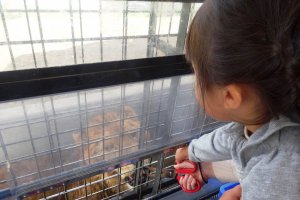 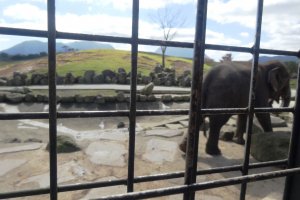 Cathy Cawood 6 years ago
I love the rhino bus!
Reply Show all 0 replies
1 comment in total