Located in Oita prefecture, closed until 2019

The main entrance down the canyon, closed

I'd heard that Yufugawa Canyon (Oita prefecture) had sustained some damage and it was closed for repairs but as there was no news update on their website since May I decided to head there myself to find out (with the hope that it was open so I could do some canyoning).

Eventually it is still closed, the entrances to go down are blocked. Happened to meet a fine lady who normally would be operating a shop there next to the car parking, if the canyon was open. She informed me that many big rocks have fallen into the canyon, it is considered dangerous at the moment thus will remain closed. They will have it fixed and ready for the start of the season next year 2019.

The only thing you can do is walk to the bridge close to the blocked entrance and get a glimpse of the canyon below. Judging by the number of cars which came, realized the canyon is closed and left, I believe that most of the people are unaware that the canyon is still closed.

Patience until next year when it will reopen!

Yufugawa canyon car parking and entrance is around 10 km northwest of Mukainoharu Station on the JR Kyudai Line, around 15 minutes by taxi.

Having graduated from the university with a degree in Business Administration, decided it was time to explore the world. After a few years on the road and 51 countries, decided to settle in Japan for a bit while. Passionate about sharing the stories of places and people I come across. 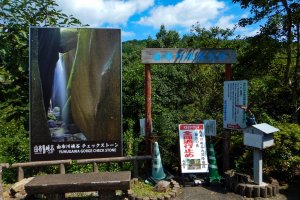 Sleiman Azizi 2 years ago
Much appreciated.
Reply Show all 1 replies

Kim 2 years ago
Thanks for the heads up!
Reply Show all 1 replies

Michael Groen 2 years ago
Woah, Thank you for your effort to inform everyone else! Was there anything else you were able to enjoy in the area?
Reply Show all 1 replies

Diagoras Kalaitzoglou Author 2 years ago
My pleasure :) Depends on how large is your definition of the "area", in the exact place of Yufugawa there is just the canyon but I humbly believe that Oita prefecture (and the surrounding areas) has so many hidden gems, it is an ourdoors paradise! Hope to cover a few of these places sooner or later :)
Reply

Yui Yamaguchi 2 years ago
Thanks for the update Diagroras!
Reply Show all 1 replies

Diagoras Kalaitzoglou Author 2 years ago
Most welcome, since reaching the place is not exactly a piece of cake thought to write about it so people will know beforehand :)
Reply
8 comments in total