A quiet place in Kurashiki

Achi Shrine’s big attraction must be its quietness. Its perch atop Mount Tsurugata in Kurashiki enables an all round view of Kurashiki below, yet we are insulated from the town’s tourist buzz. The dominant sounds come from prayers, birds cheeping, leaves rustling, but these are unobtrusive, weaving themselves into the peaceful music of the surroundings.

A particularly restful place to sit is in what I view as a Zodiac sanctum. This is one of the numerous smaller shrines which has an unique, large circular Zodiac lantern hanging from the ceiling, with figurines of the 12 Chinese Zodiac animals plastered on it. The only pity is the lack of an explanation of the origins of this Zodiac at Achi. Actually, I am only guessing it is a lantern as no identification is given.

The Zodiac motif is also prominent on the lucky paper charms that hang from the nearby Mokkoku tree. Prayers at the tree or to the tree bring good fortune in relationships. The Zodiac animals double the fortune. The Mokkoku tree is in itself interesting being sometimes compared with the reputed Japanese national character. Although common in Japanese gardens, it is regarded as a low-key player among trees. It hovers in the background with no outstanding features, but still it is paid tribute to as the king of Japanese garden trees.

The Zodiac sanctum is unique, maybe the most interesting thing at Achi, but it is the Shrine’s large wisteria trellis that is the most mentioned attraction. It is between 300 and 500 years old - blooming since the days when its purple colour belonged exclusively to the nobility. So now, even when not in full bloom as it is between April and May, the wisteria, because of its durability, being almost eternal, is prayed at for encouragement, inspiration, long life and good health.

The wisteria is not a random choice. Achi Shrine is Buddhist, specifically, the Jodo Shinshu Shin sect, and the wisteria flower symbolizes the humility and prayer espoused by this branch of Buddhism.

Also on the grounds is a Noh stage, When no Noh is being performed, what you see is what you get, an empty stage. But some innocuous looking granite boulders strewn around turn out to be “seats of the gods,” or iwakura. Japanese Shinto belief has it that stones emit natural force fields, just right to attract kami, the holy spirits, the deities.

Achi Shrine’s kami presence is pretty powerful. The three Munakata sea faring Goddesses reside here, as does Tenjin, the deity for education, as well as the God for kitchens and groceries. These deities, I imagine, wield considerable clout, being essential to aspects of life and welfare of Kurashiki. Whether a believer or not, they make shrines into quiet, holy places.

Achi Shrine, Zodiac sanctum and all, is such a place, always welcome when just the thought of yet another tourist shop makes one tired.

I walked up to Achi Shrine from Kurashiki’s Bikan Historical Quarter going through a small bamboo grove, and under the wisteria trellis. A walking map of the area is available from the Tourist Information Office in Okayama and Kurashiki. 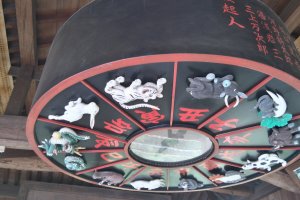 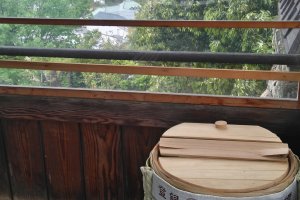 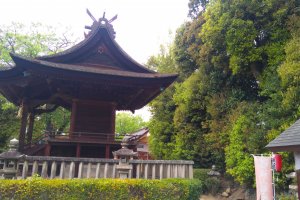 Elizabeth S 2 years ago
Syncretism at Shinto shrines is fascinating. When I get a chance, I'll write about shishimai dances at shrines. These performances originate in China.

Arlene Bastion Author 2 years ago
That would be interesting!
Reply

Cathy Cawood 2 years ago
I've been to Kurashiki twice, but I didn't know about this place. It looks really interesting. The zodiac lantern is very cool!
Reply Show all 1 replies

Arlene Bastion Author 2 years ago
Go again! Few places to sit, really, in Kurashiki itself, unless in a restaurant or lucky find of empty bench. So this place you can sit if needed.
Reply
4 comments in total