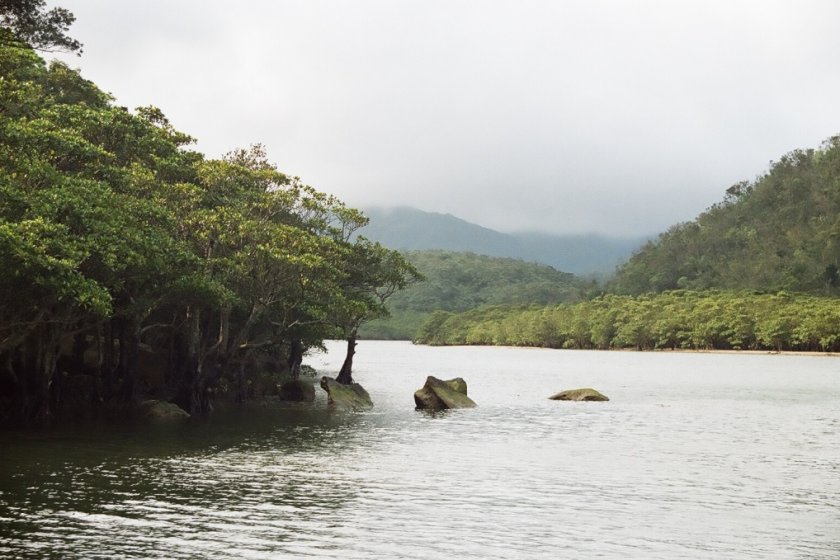 To get to the trail head, take a boat that carries you up Urauchi River

Thinking of a jungle in Japan, Tokyo’s busy cityscape springs to mind first, an ocean of grayish concrete, garish neon signs and masses of people everywhere. This is the jungle we are used to. Would you think of lush green vegetation sprouting wherever it pleases and of wild rivers not tamed by concrete barriers – in Japan??

Edging close to the Tropic of Cancer, Iriomote Island is about 2,200 kilometers southwest of Tokyo. About 80% of the island is mountainous terrain covered in sub-tropical jungle. Yes, you read right. Jungle in Japan!

On a cold Tokyo winter night my Spanish friend Carmen and I decided that, come April, we would hike across Iriomote, and this is exactly what we did. Here comes the report:

In good old backpacker fashion, we opted for the Irumote-so Youth Hostel as a base and when we enquired about the hike the staff took us to the local police station where hikers have to register their intentions. Here you will also get a hiking map and a phone number, in case you run into trouble since this is not your average hike in Japan.

To get to the trailhead, we took the first boat in the morning that carries day trippers up Urauchi River and into the interior of the island. This river gives the impression of a mini version of the Amazon, meandering its way through the jungle landscape. For once there were no eyesores but just greenery as far as we could see. The boat went as far as a boat landing in the middle of nowhere and we got off.

There were mostly silver-haired day trippers on the boat and they wore perfect outdoors gear as if they aimed for Everest. However, their destination for the day was the Maryudo and the Kanpire Falls, two of Iriomote’s scenic waterfalls. Carmen and I made it up the hill to the falls in no time. The majestic waterfalls invited us to rest and appreciate the nature but we were quite conscious of the time and pressed on looking for the first signpost that marked the beginning of the cross-island trail.

A group of young Japanese lads were watching us as they picnicked at the edge of the falls. “Do you know where the hiking trail starts,” I ask them in Japanese. “Eh, are you serious?” One of the lads knew what we were looking for and he guided us to the first post. He insisted that our planned adventure was very dangerous, “abunai” but our minds were set. So he just shrugged his shoulders, pointed us to the trailhead and wished us well.

The trail starts at the top of the Kanpire Falls and it cuts across the island in a southern direction. It finishes near Otomi village on the other side of the island. There are some 24 sign posts along the trail, at least in theory, one at every 400 meters.

Now, imagine how often you walk this distance in the underground passages of the Tokyo Metro between gates. Four hundred meters is nothing and you can make it in a few minutes, right? Not so on Iriomote, as we soon found out.

The trail was narrow and confusing. Some landslides and false trails made navigation close to impossible. Many signposts were difficult to make out as their brownish color blended in too well with the natural surroundings. Some posts were totally overgrown or had fallen down.

The hours passed quickly and our progress was too slow. We had to make a decision here. Either turn around and catch the last boat back leaving at 4pm or continue our adventure. One look at each other was enough. “Continue,” we said in unison but our optimism soon dampened as it took us forever to maneuver the often not recognizable trail.

The hike was a constant up and down over hills and crossing of countless creeks. Actually we started to count them but gave up at the 20th or so. The vegetation was so lush we couldn’t see what was around the corner and only the trickling sound of water announced the next creek to cross.

We climbed up one hill, then slid down the narrow path still slippery from the rain earlier, before hiking up the next hill. This hard up-and-down walk quickly sapped our energy. After the first river, there was the second, the third and the fourth and we had to cross them without the luxury of a bridge. By then we did not care anymore about staying dry but just had to cross the damn things.

The sun was setting and we started to race against the fading daylight. It got dark and darker and we could hardly see the trail anymore, but then suddenly, miraculously, the path finished and we found ourselves on a forest road which started right where the jungle trail ended at signpost 24. This trail is only 21 kilometers long but it took us a whole day to conquer.

There was no daylight anymore. Walking down the final seven kilometer stretch of the hike in pitch black darkness, the white pebble stones of the road led the way. The eerie quietness was broken only by the croaking of some frogs and the occasional chirping of birds.

Then a great spectacle began to unfold. Tens of thousands of fireflies (hotaru) appeared. They punctuated the darkness with their tiny lights and guided us back to civilization. 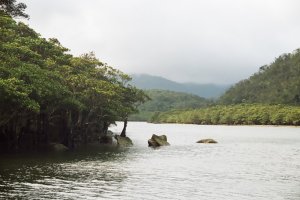 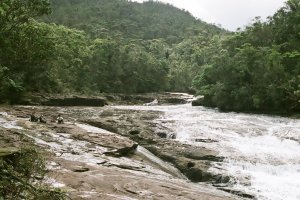 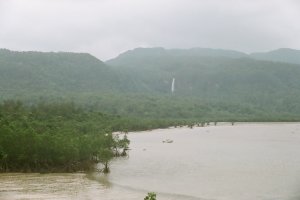 Olga 6 years ago
Iriomote is a great island but it takes so long to get there!
Reply Show all 0 replies
1 comment in total