A beautiful, scenic race in mid-fall

Looking for a nice race to run in late fall, when it's relatively cooler but still warm enough to wear summer apparel? The Shouhashi Half Marathon in southern Okinawa might be just what you're looking for. With spectacular ocean views, great crowd support, and live music just past the halfway point, there is plenty of visual and audio stimulation to help make this an enjoyable race.

Located in Nanjou city, south of Naha, the race begins and ends in Chinen Village. If you're someone who likes to be organized and on time, it might pay to familiarize yourself with the location by driving down the day before to collect your bib. It's not particularly difficult to find if you're using GPS capabilities, but it will take some time to get there if you're traveling from the central and northern parts of the island. Furthermore, access to the start area is by shuttle bus only, so runners will need to check the website for information on designated parking areas and shuttle bus times. One other thing to be mindful of regarding the parking areas, is being sure to take note of where exactly you park; my friend and I had to take a lucky guess as to which shuttle bus we needed to board after the race!

Once you get to the start area, I highly recommend heading straight over to the lines of people waiting to drop off their bags. Last year, we realized a little too late that we should have dropped our bags off before doing anything else. Fortunately a friend's husband offered to look after our bags for us while we ran, but had that option not been made available to us, it's likely that the time we spent in line would have resulted in us having to start way at the back of the crowd.

In other races in Okinawa, where the number of participants is less than a couple of thousand, it's not so difficult to weave your way to the front if you happen to get caught in the back. But the Shouhashi Half Marathon is such a popular race that it draws up to ten thousand runners, so unless you start somewhere near the front, you can expect to lose a considerable amount of time during the first two miles.

On the bright side, if you do happen to get stuck in the crowd and have no choice but to slow jog, or even walk the first mile or so, you may find it to your advantage. At the 5k mark, the course takes runners up a steep incline which lasts for almost a mile, but seems as if it's several miles. Getting up this hill requires a lot of strength and energy, but it's possible that those who are forced to run slow in the beginning might find that their energy stores are still relatively untouched by the time they reach this point.

Once you get up to the top of the steep incline, there is still a little more uphill running to do, but if you can make it to the halfway point then it's mostly downhill from there. You'll run down the long Nirai/Kanai bridge, which rewards runners with a stunning view of the bay.

At the bottom of the bridge you'll head back towards Chinen Village, and quite possibly pick up the pace as the remaining miles are relatively flat. The larger crowd support towards the end of the run also seems to provoke a fresh burst of energy, although I would caution you not to get too carried away, as you want to be able to reach the finish line without having to drastically reduce your pace.

By the time you run towards the big yellow arch which marks the official finish line, you'll be ready to accept the after-race refreshments made available to the runners, and you'll most definitely have deserved the beautifully crafted red-clay medal that's awarded to all runners.

If you enjoy the more scenic races, and you don't mind large crowd participation, then I recommend the Shouhashi Half Marathon. It's a well-organized race, with plenty of water stations along the way, and terrific support from locals who generously spend all morning cheering on runners and offering various types of foods, including cut up oranges and bananas, candies, and black sugar cubes.

All in all, this is a fun race, with perhaps only one unfavorable aspect - the degree of difficulty, combined with the large number of runners makes it an unlikely course to set a personal record on. However, it would be an ideal training run for those preparing to run the Naha marathon, or for anyone simply wanting to enjoy a race with beautiful scenery and lots of positive energy. 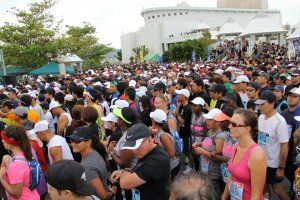 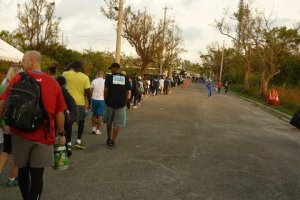 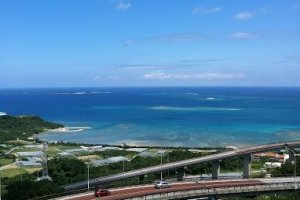 Jannine Myers Author 7 years ago
Hi Nicole,
Sorry for the confusion, it's a Japanese website, but if you use Google Chrome to access the website, you can click on their "translation" tab and it will translate the information from Japanese to English. Hope this helps.
Reply Show all 0 replies

Nicole Bauer 7 years ago
There seems to be only a Japanese website, although you have indicated an English one. Is this correct?
Reply Show all 0 replies
3 comments in total