A temple that honors the head of a famous samurai

Kanshin-ji is a temple with a history going back over 1,000 years, one playing an understated yet crucial role in shaping the history of Japan during the chaos of the 14th century.

Now it is a popular local spot for maple viewing and history enthusiasts, with its large and slightly wild gardens never feeling crowded.

The temple was founded in the 7th century by the legendary monk En-no-Gyoja. He is most widely known as the founder of Shugendo, the almost shamanistic practice of the Yamabushi or Mountain Worshippers.

In the 8th century, another legendary monk, Kukai, the founder of Shingon Buddhism (and nearby Mount Koya) restored the temple after it had fallen into disrepair.

During the 14th century, and the civil war period known as the Nanboku-cho Jidai, the story of Kanshin-ji takes an important turn. It was here that a young Kusunoki Masashige was educated. He would go on to become one of the top generals and strategists of the Southern Court, a branch of the Imperial line that was based for a time in Kawachinagano (the rival Northern Court was based in Kyoto).

Kusunoki was born in the nearby village of Chihaya-Akasaka and was an extremely important figure in this region during his relatively short life. He built a number of castles in the area and fought and won some daring battles against both the Kamakura Shogunate and the Northern Court. Kusunoki also protected a stretch of the Koya Kaido, the pilgrimage trail running between Kyoto and Mount Koya.

Upon his death in the Battle of Minatogawa (near modern day Kobe) in 1336, his head was cut off and sent to Kanshin-ji for a respectful burial.

The temple is sent on a hillside in the foothills of Mount Kongo om the eastern side of Kawachinagano and features a number of interesting buildings and objects spread around its slightly wild gardens.

Its entrance is marked by a large wooden gate, painted red and just off to the side of this, you can find a statue of Kusunoki Masashige on horseback. There is a similar statue to this outside of the Imperial Palace in Tokyo, and of all of the famous samurai throughout history, only Kusunoki is afforded this honor, owing to his devotion to the Emperor.

To the right, once through the gate, you can find a small square platform, surrounded by a moat and covered with trees and an inscribed stone. This dais is the remains of a palace for Emperor Go-Murakami, one of the 14th century Southern Court Emperors.

Ahead of you is a stone staircase, flanked by trees and leading up towards the Kondo. About half way up, on the right side, is the Chinjyudo, a small shrine which houses the guardian deity of the temple. The original was built by Kusunoki Masatsura, son of Kusunoki and on the order of Emperor Go-Murakami. In 1344, it was destroyed by fire and later rebuilt in the Azuchi-Momoyama Period, in the late 17th century.

At the top of the steps is the Kondo, a wide, squat building with vermillion beams and bright white panels. This building is the oldest national treasure building in Osaka Prefecture. It is also built in its own unique style called Kanshin-ji Zukuri which takes its influence from Chinese, Japanese and Indian Buddhism. The Kondo also contains another national treasure, the Nyoirin Kanzeon Bosatsu. This statue of Kannon, Goddess of Mercy dates back to the 8th century Heian Period and is considered one of the best examples of esoteric art from this time, over 1,000 years ago. The statue is only shown to the public for 2 days each year, from the 17th to 18th of April.

Next to the Kondo is the Tatekake-no-To. This small, square building, with its heavy thatched roof was intended to be a three-tiered pagoda. Its construction was started by Kusunoki Masashige after he had ordered a considerable amount of renovation work to be performed at Kanshin-ji. However, by the time he was killed in battle, only the first level of the pagoda had been completed and as a mark of respect, it was decided to leave the pagoda unfinished.

Beyond this is the Mieido, a small shrine and statue dedicated to Kukai, also known as Kobo Daishi. Scattered around this area, and on the other side of the Kondo are 7 small mounds called Hoshi-zuka, or Star Mounds. It is said that when Kukai visited Kanshin-ji, he offered a prayer to the Big Dipper and mounds were created so that everyone could show their reverence.

To the right of the Mieido is another stone staircase which leads up into the trees. The uneven steps make the climb tiring despite its short distance. At the top, there is a low mound, covered in vegetation and surrounded by a fence of short stone columns. This is the grave of the 97th Emperor, Go-Murakami who ruled the Southern Court from 1339 to 1368. It is a solemn and surprisingly understated place that feels isolated from the rest of the temple. Even the birdsong here feels muted.

From the bottom of these stairs, and continuing along the path away from the Kondo, are another couple of ancient wooden halls and right in the corner, a stone stupa. This stupa is in fact the Kusunoki Masashige Kubi-Zuka, the grave containing the head of Kusunoki Masashige.

On the opposite side of the grounds is the Onshi-Kodo, a large hall which has been recently renovated but is rarely open to the public. Next to this is the Reihoukan, the treasure hall of Kanshin-ji. This is open to the public and contains dozens more beautiful statues, many of which are over a thousand years old.

Closer to the main entrance is another hall called the Honbo. This building feels more like a large house but with a confusing, maze-like interior. It contains Kanshin-ji's own Shojin-Ryori (vegan friendly Buddhist temple style cooking) restaurant called KU-RI. The Honbo also has a gate which only the Emperor is allowed to pass through and so remains permanently closed.

With such a rich and important history, Kanshin-ji is an ideal place for history lovers to learn about the Nanboku-cho Period, a lesser known time of civil war somewhat overshadowed by the Sengoku Period from which most samurai themed movies and video games are based.

It is also a perfect place for nature lovers. With a plum garden and a large number of maples within its grounds, Kanshin-ji is at its most beautiful during fall and early spring. And, as a lesser known temple deep in the Osaka country side, Kanahinis something of a local secret that never becomes crowded even in peak seasons. 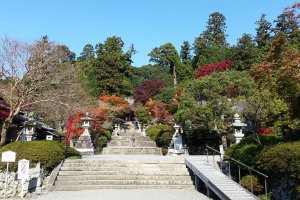 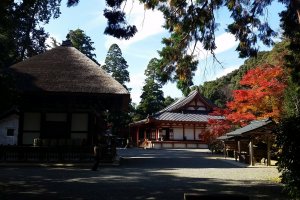 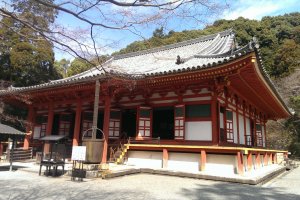 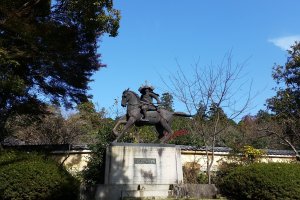 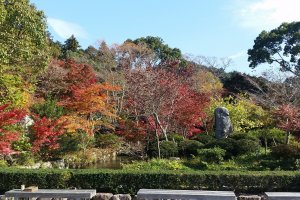 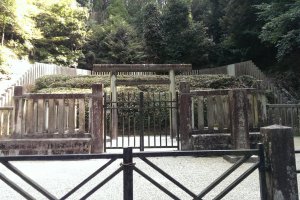 Greg Goodmacher 2 years ago
I felt as if I were walking on the grounds with a tour guide next to me. Good writing.
Reply Show all 1 replies

Gary Luscombe Author 2 years ago
Thanks I appreciate it!
Reply
2 comments in total