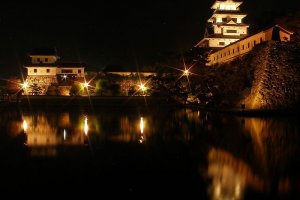 Protruding from a concrete landscape—one of the tallest things in sight—is Imabari Castle, in the coastal city of the same name. This structure is one of three Mizujiro, or “castles on the sea,” in Japan. Construction began in 1602 under the local feudal lord and eminent designer of castles Todo Takatora.

In 1635, Matsudaira Sadafusa, the nephew of the famous shogun Tokugawa Ieyasu, became the owner; Imabari’s position near the Seto Inland Sea provided a strategic advantage for controlling maritime traffic. With the Meiji Restoration, however, the Matsudairas fell out of power and many of the buildings on the compound were disassembled. In 1980, the city rebuilt the tenshu, or keep, out of concrete and ever since has been erecting old buildings loyal to original techniques and materials.

Nowadays Imabari Castle is noted for its seawater moat (it stands right by a port), which, centuries before, would have protected against arrows and other weapons. The keep has five layers and six stories, offering wonderful views of both city and sea, as well as the Kurushima Kaikyo Bridge. Picturesque view aside, the castle itself warrants close scrutiny. From dusk to 11 p.m., illuminations cast a warm glow on the white walls and multicolored stone. If you look for long enough, you can see large fish jumping out of the moat.

Inside are numerous artifacts detailing the feudal history of the area, including suits of armor that belonged to the feudal lords, clothing, weapons and art. A smaller gallery even touches on the natural history of Imabari, exhibiting stuffed animals and fossils. Also on the grounds is a magnificent statue of the designer Todo Takatora on horseback, as well as an air raid siren erected during wartime. For ¥500, visitors can view the exhibits or even explore the Shinto shrine on site.

Imabari Castle is one of the obvious landmarks of the city of Imabari. It’s a very pretty castle, surrounded by a square moat ..

Imabari Castle is one of Japan's only seaside castles, and a beautiful place to pass a spring afternoon.

Classy comfort can be found at the Imabari Kokusai Hotel in northern Ehime Prefecture.

Imabari is shipbuilding town with a beautiful castle and an attractive old commercial district. It's also the doorway to the..

Hakurakuten is well known for its yaki-buta-tamago-meshi, a specialty of Imabari. But fans of this dish believe that there are better..

There is no better way to see the Kurushima Kaikyo Bridge and its stretch of the Seto Inland Sea than from the top of Mount Kiro, at the southernmost..

The Imabari City Kono Museum of Art is an old-school Japanese art gallery. It has a fine collection of screens and scrolls, and..

Gofukuten Sugataya and Gallery Kazahaya stands on a street corner marked by a beautiful weeping willow that provides a lively contrast..