A posh sleep in central Imabari

Just a few blocks from the seafront castle of Imabari, the Imabari Kokusai Hotel is one of the city's better places to bed down for the night. You can't miss it - the hotel's main tower looms large on the Imabari skyline and it's a very short walk from the JR Imabari station.

The lobby seems to be aiming for the "luxe look", with a massive chandelier, polished marble floors and curving staircases weaving up to the second floor. I half expected to be welcomed with piano music but instead, I was treated to a friendly and incredibly efficient check-in procedure. The staff had already assembled my room key, internet connection information, onsen bath passes and a local map on the area's eateries.

My family had booked a twin room in the hotel's attached annex and it was, without a doubt, one of the most spacious hotel rooms I have stayed in here in Japan. The beds, while slightly harder than I would prefer, occupied only a third of the room. The rest of the space was give over to a significant lounge area (table and two chairs) right near the window and a desk that ran much of the length of the room, boasting the television, a tea corner, and an uncluttered work space. The bathroom had its own massive separate walk-in shower and bathing area and, if you prefer to be pampered a bit more, the third floor of the main building boasts an onsen (with outdoor tub) that is open to all guests (passes issued on arrival).

While the views from our window were less than inspiring, some rooms sport views of Imabari Castle, while higher floors may be able to glimpse a view of the nearby sea.

The hotel has an on-site restaurant with an extensive selection of both Japanese and European cuisine. Breakfast is also offered at ¥1700 extra (unless included in your room deal), and the buffet is a lovely spread of fruit, eggs, bacon, toast and many many Japanese dishes (think rice, fish, vegetables, mixed salads, etc).

For drivers, there is a parking lot immediately in front of the hotel. As it's not a multistory car park, it's easy to run out to your vehicle to grab anything you may have forgotten upon checking in.

Imabari doesn't offer a host of reasons for travelers in Japan to linger, but if you're in the area and need a place to stay, the Imabari Kokusai Hotel is a solid choice. 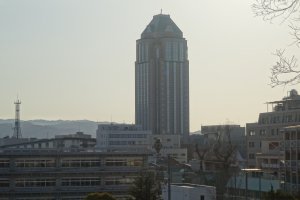 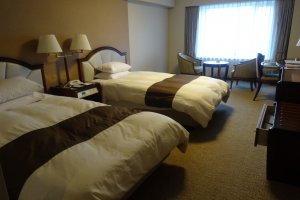 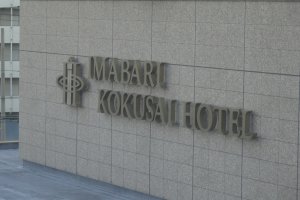 Veronika Tomanova 6 years ago
The hotel seems quite good. Lots of space is always great!
Reply Show all 2 replies

Mandy Bartok Author 6 years ago
Veronika, I was really surprised by how spacious the room was. I'm not sure what a single would look like but the twin room was positively massive for a Japanese hotel room.
Reply

Veronika Tomanova 6 years ago
Thanks for response, Mandy. Have fun in Japan!
Reply
3 comments in total