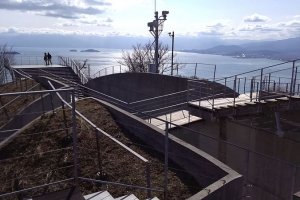 There is no better way to see the Kurushima Kaikyo Bridge and its stretch of the Seto Inland Sea than from the top of Mount Kiro, at the southernmost point of Oshima island. On particularly clear days, the spectacular view extends to the jagged summit of Ishizushi, the largest mountain in western Japan, and was named one of the 88 best sceneries in Shikoku. The observatory park on Mount Kiro was designed by Pritzker Architecture Prize-winner Kengo Kuma; the sleek, metallic observation point goes nicely with the surrounding flora, which is preserved to maintain the natural beauty of the site.

The numerous stairwells and decks make for a 360-degree view of the sea, which is especially breathtaking at sunset, as the distant mountain ranges fade to blue and a warm-toned sky is reflected on the water. At night, the bridge is illuminated. In spring, the forested region of this panoramic view is dotted with cherry blossoms.

It’s possible that you’re biking since the park is only a few minutes away from the Shimanami Expressway, a popular and famously well-organized cycling route that spans several islands, including Oshima. Getting to the summit involves a steep ride and many steps, but the view is well worth it, not to mention the public restroom facility and kiosk.

A 20-minute drive from Oshima-Minami Interchange.

Imabari is shipbuilding town with a beautiful castle and an attractive old commercial district. It's also the doorway to the..

Classy comfort can be found at the Imabari Kokusai Hotel in northern Ehime Prefecture.

Sadame Restaurant on Oshima Island in the Seto Inland Sea is a comfortable little eatery with a wide menu. The fresh fish is especially..

Shigematsu Hanten is a small Chinese restaurant tucked away in a commercial suburb. It serves the specialty of Imabari, pork and..

Protruding from a concrete landscape—one of the tallest things in sight—is Imabari Castle, in the coastal city of the same name. This structure is..

Iki-ikikan is a Road Station with a restaurant, food stalls, restrooms, and a place for fish BBQ. It’s located on Oshima Islan..

Oshima—‘Big Island’—lies off Imabari in the Seto Inland Sea. It’s accessed by the Shimanami Kaido expressway via a suspension ..