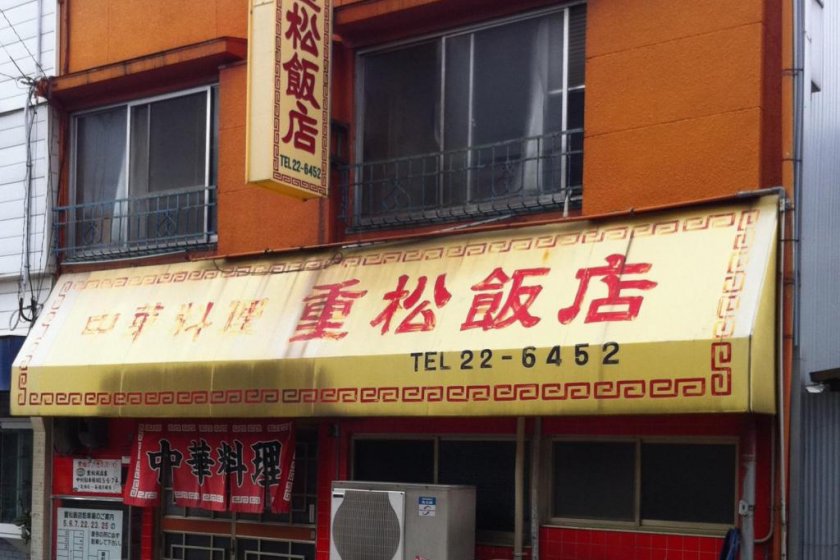 On a trip to Imabari, I fell into conversation with a young Japanese man I met. He worked at the Kurhaus onsen and swimming pool complex where I had a morning swim. Having graduated from an American university, he was keen to give his English a run. I asked him to recommend a place for lunch. Without hesitation, he suggested I try yaki-buta-tamago-meshi, a specialty of Imabari featuring seasoned pork (yaki-buta) on a bowl of rice (meshi), topped with two soft fried eggs (tamago), with sauce (tare). Since I was half starving after my swim, I thought the yaki-buta-tamago-meshi sounded very good indeed.

Shigematsu Hanten is a small Chinese restaurant tucked away in a residential and commercial area. It features a yellow sign and a canopy over the doorway that is stained with grease and food fumes. Inside, the restaurant is sparsely furnished. There were lots of customers, even past the peak time, and so I was seated at the narrow counter facing the wall. I couldn’t help noticing that there was a patina of sauce up the wall to a certain height. Indeed, the ‘dirty Chinese’ restaurant is a staple of Japanese life, and people seem to enjoy eating tasty food in grotty surroundings. It does have a homely feel, even if one’s own home doesn’t actually have sauce on the walls.

I ordered the yaki-buta-tamago-meshi set, with ramen and a little salad for 750 yen. The ramen and salad were very middling, but the yaki-buta-tamago-meshi was quite a treat. The soft fried egg has plenty of pepper on top, and the combination of the pepper, egg yolk and rich sweet sauce was very good indeed. The pork is also of high quality, and the large chunks of meat provide a nice chewiness. This concoction goes cold rather quickly, so it’s good to wolf it down while it’s still hot, as all the other customers seemed to be doing.

Yaki-buta-tamago-meshi is one manifestation of Japan’s recent “B-kyu gurume” boom – B-class gourmet, which focuses on the very tasty and unpretentious dishes that working people tend to eat for lunch in thousands of small eateries across the country. This genre is now featured on many TV programs and in contests across Japan, with yaki-buta-tamago-meshi being a frequent winner. Come to Imabari and try it. 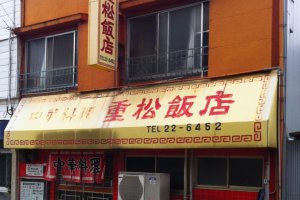 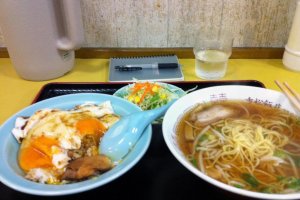 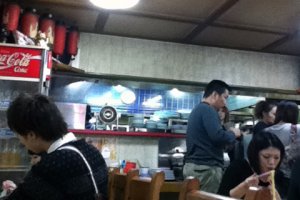