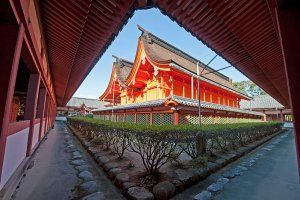 Thought to be at least 1000 years old, Isaniwa is one of Japan’s three shrines dedicated to the deity Hachiman. After climbing a long stretch of stone stairs, passing a double-story gate, a magnificent bright-red structure emerges.

The architectural details are especially grand with the building’s swooping tile roofs, gold-leaf columns and ornate, cloudlike beam engravings. In addition to the spectacular architecture, there are displayed paintings of warriors and warfare (as Hachiman is the guardian of warriors and protector of Japan) and even numerous documents on Japanese mathematics. A hall of treasures features swords and armor for samurai history buffs. Other relics include animal paintings and calligraphy.

Supposedly, Isaniwa Shrine originally marked the location where Emperor Chuai and Empress Jingu, who reigned in the third century AD, bathed at one of Japan’s oldest bathhouses, Dogo Onsen, now just a few hundred meters away. The shrine was moved to by the Kono samurai clan in the fourteenth century to the current location where, after conquering the stairs, you can enjoy breathtaking views of Matsuyama city. It was rebuilt in the 17th century by the Matsudaira clan; the current buildings with their great vermilion surface date from 1667. The original imperial bathers are enshrined there.

Despite its age, the shrine is still buzzing with worshippers and even couples celebrating or taking pictures for their wedding. Although visitors note that the stairs are a little treacherous, the views and tranquil atmosphere only add to the experience of walking around the colonnade and absorbing a rich and long history—and if you’re lucky, observing a modern-day ceremony. If the trip does tire you out, you can always relax at Dogo Onsen at the foot of the compound.

Isaniwa Shrine sits above Dogo offering a fine view over Matsuyama. Its vermilion walls and gold leaf are a stunning sight.

Elegant Run Of the Mill Ryokan in...

Spa Ryokan Dougoya offers a ryokan-like experience in a stylish 1930s building in Dogo for travelers on a budget.

Spa Ryokan Dougoya offers budget accommodation in Dogo with the atmosphere of a traditional ryokan.

Dogo's newest addition to the eating, drinking, art scene, Wani to Sai. Located in an atmospheric corner of Dogo, this "circus..

Dogo no Machiya is a beautiful café with courtyard gardens and stylish Japanese décor. It’s ideal for breakfast, lunch, or a r..

At Matsuyama’s most famous temple, a sight almost as guaranteed as the temple buildings themselves is the cadre of pilgrims in white traveling the Shikoku..

Most might not expect to find a French-style villa below Matsuyama Castle, but this elegant construction offers a respite from the bustling town center..

Matsuyama Castle is one of the twelve "original castles" in Japan, i. Castles that have survived the post-feudal era since 1868 unscathed. It is located..