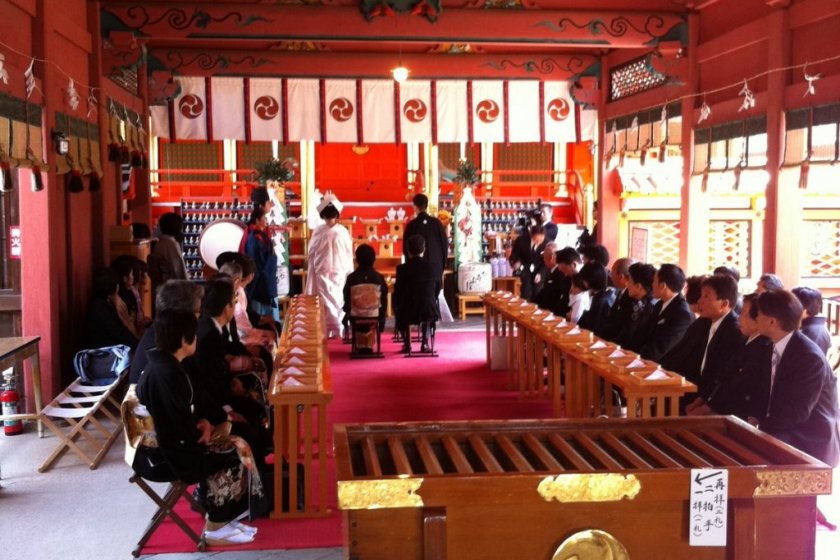 A striking view over Matsuyama

A Shinto wedding in progress

Behind Dogo Onsen, you’ll find a large torii gate with a road leading steeply up a hill. At the top of the road is an even steeper flight of rough stone steps, topped by a towering vermillion red structure. This is the gateway of Isaniwa Shrine, which sits above Dogo offering a fine view over Matsuyama.

Isaniwa Shrine is very much a ‘working shrine’. Whenever you visit, you’re likely to encounter some sort of ceremony going on, whether it’s a Shinto wedding, or a blessing for a newborn child. Casual visitors can also be seen dropping by and making a quick obeisance.

You can enter the shrine freely and walk around the colonnade that encloses the buildings. If you’re lucky enough to be visiting when a wedding is being held, you can glimpse the bride and groom in their kimonos, and the kannushi in his white robe through the bars of the colonnade. In fact, there’s nothing to stop you mingling with the other guests and enjoying the sight of the two families lined up facing each other in their formal black suits and kimonos.

Isaniwa Shrine is devoted to the god Hachiman, patron of warriors, and decorating the shrine here and there are a number of paintings of warriors and warfare, dating from various periods. One panel from the Meiji period shows a number of steel battleships and little stick men with rifles engaged at the siege of Port Arthur.

The shrine is said to have been founded on the site where Emperor Chuai and Empress Jingu bathed at Dogo Onsen. Modeled on Iwashimizu Hachimangu in Kyoto Prefecture, the current buildings were constructed in the Hachiman-zukuri style in 1667. The shrine is visually stunning with its red paint, gold leaf, its roofs of cypress bark and tile, and its semi-tropical greenery.

From the back of the shrine to the left is a flight of steps that leads back down into Dogo via the Hogonji temple and Neon Zaka, the old prostitution district lined with buildings that may once have been houses of ill-repute. As you head back into Dogo, the building become smarter and more salubrious.

Find out more about Isaniwa Shrine. 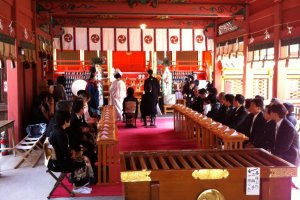 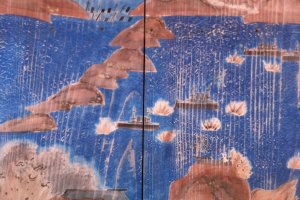 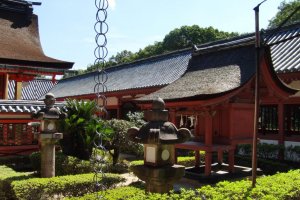