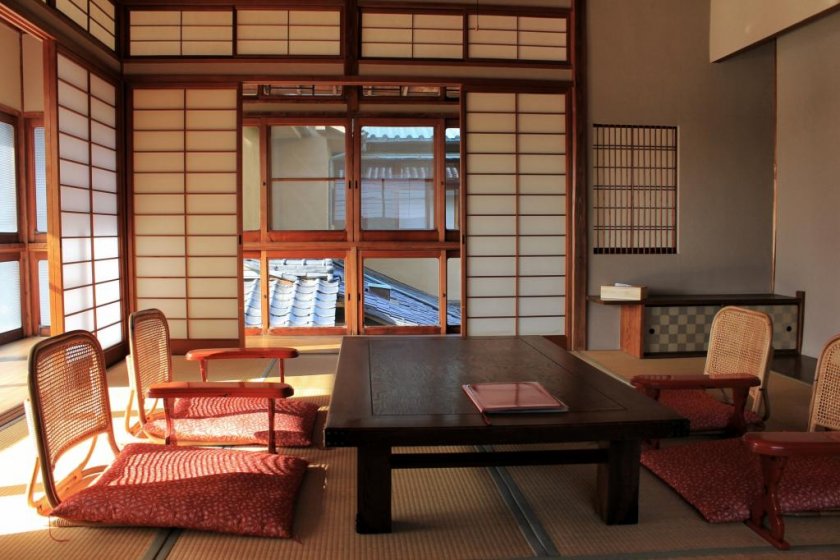 Elegant Run Of the Mill Ryokan in Dogo

A stylish ryokan-like experience in Dogo on a budget

One of the upstairs rooms at Dougoya

Suppose you’d like to stay in Dogo, enjoying a ryokan atmosphere but without the cost and formality of a typical ryokan. Instead of eating a lavish meal in your room and then going to bed, perhaps you’d like to try one of the many restaurants and bars in Dogo — but you want the convenience of breakfast in the morning. What are your options?

Well, Spa Ryokan Dougoya is about your only option in fact. This gem is tucked away behind the massive grey bulk of Dogo-kan Hotel, presenting an interesting contrast with its elegant wood-framed windows, and its tile and copper roof. Originally, Dougoya was a ryōtei, an upscale restaurant with several luxurious private rooms. Built in 1935 in the early Showa Period, it was frequented by politicians as a discreet meeting place. With the addition of a bath with water piped from the Dogo onsen source, a couple of showers, a common room and a guest’s kitchen, the ryōtei became a budget ryokan. It’s run by Hisatsugu Shimizu, owner of the popular Backpackers Miyajima in Hiroshima.

The early Showa was a stylish age, and Dougoya is a fine example of the quiet elegance that prevailed at the time. The building is beautifully preserved, and those with an eye for design will enjoy the craftsmanship displayed in the details of the interior decoration. This is complemented by artful ceramics and scrolls added by Shimizu-san. The tables and the armrests for the low chairs are all antique too.

Dougoya is conveniently located close to Dogo Onsen Honkan, just up the hill from Dogo Arcade and Tsubaki Onsen.

Local restaurants include Dogo no Machiya café, Dogo Biiru Kan Brewery Restaurant, Nikitatsu-An Restaurant, and Dogo’s “Circus Bar”, Wani to Sai. Prices start from 3,000 yen per night for a futon in a dormitory-style room, which includes breakfast. This is ideal for budget travelers and ohenro pilgrims. The price is the same for weekdays and weekends. Private rooms start at 6,000 yen per person per room, with the rate discounted by 500 yen for each extra person. Weekends are 500 yen extra. So four people can stay for 20,000 yen on a weekday, and 25,000 yen on a weekend.

The upstairs rooms offer fine views over the ryokan itself on one side, and to Matsuyama Castle on the other. 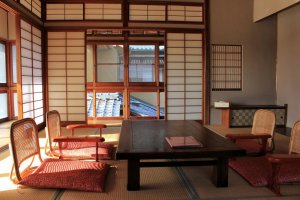 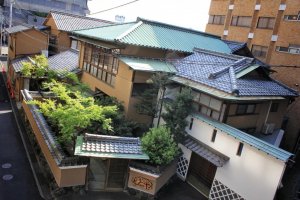 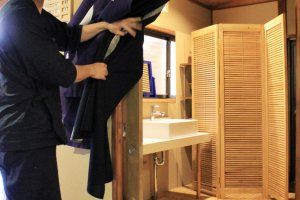 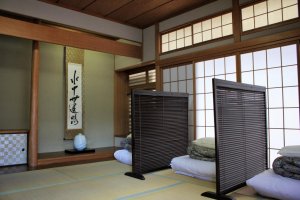 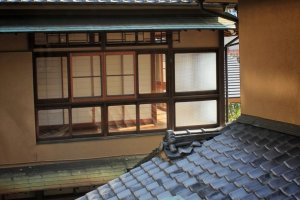 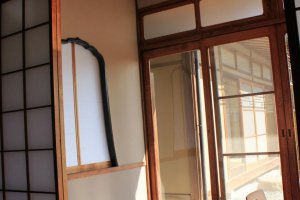