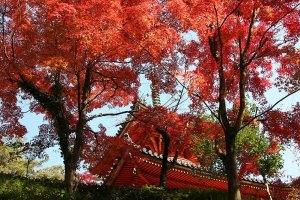 Mitaki-dera is a beautiful traditional Japanese temple complex, tucked away in a forest on the slopes of Mount Mitaki, just north of the city of Hiroshima. Mitaki is named for the three waterfalls on its site, as its Japanese characters literally" "three" "and "" Waterfall "" read.

The temple is dedicated to Kannon, the goddess of mercy and was built in 809. There is a distinctive two-story pagoda near the entrance to the complex. It was moved from Wakayama to Hiroshima in 1951 to comfort the souls of those killed by the atomic bomb.

There are several memorials for the atomic bomb victims and also numerous stone Jizo statues. Jizo is the protector of women, children, and travelers, and his statues can often be recognized by their bright red hats and bibs. There is also a small, rustic looking tea house that serves traditional Japanese food.

Hiroshima Castle, also known as Carp Castle, was originally built in the 1590s. It was destroyed by the atomic bomb along with the rest of the city in..