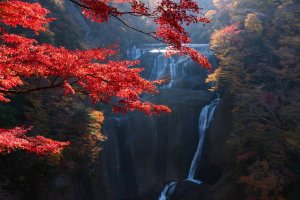 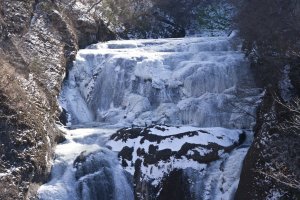 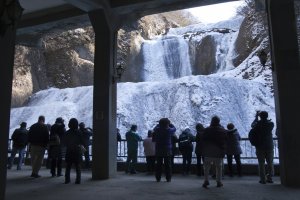 The Fukuroda Falls are known as one of the" "Three Great Waterfalls" "of Japan, and it is not difficult to see why. The water tumbles over a four-level cliff, giving it the alternate name" "Yodo no Taki "", which means "" four times a waterfall "".

The falls are particularly beautiful in autumn, when the surrounding mountains are adorned with the fiery red and orange autumn colors. In winter, the falls freeze over in a breathtaking ice spectacle and the cool spray of the rushing water also makes them a popular place to escape the heat of summer.

In the winter, you can see “Hyobaku”, a phenomenon where the entire Fukuroda Waterfall is frozen. Between late December to February, the cascading waterfalls have the chance to freeze entirely if temperatures are cold enough. During this period, the official website updates daily “Falls Freezing” updates with images to show the current state of Fukuroda Falls. It is recommended to visit in the morning when it is colder, for a higher chance of viewing the frozen falls.

The massive 3-stage observatory deck allows visitors to enjoy the falls up close. Visitors first walk through the 276-meter long passage tunnel to reach the deck, where you can take an elevator to the top to enjoy a panoramic view. The bottom two floors allow a closer view of the falls at different angles. Try the suspension bridge on your way back to experience walking above the base of the waterfall.

Every year between early November to late January, Fukuroda Falls holds a winter illumination event. The area near the falls and the tunnel will be spectacularly lit up, creating a beautiful night time scene. The tunnel will also be decorated with light structures, a sight that can only be seen during this event.

Ibaraki’s famous Fukuroda Falls, one of the 3 most beautiful falls in Japan, is located near the northern city of Daigo, rough..

The Fukuroda Falls of Daigo light up once a year and create splendid imagery for all to enjoy.

A Visit to Fukuroda Falls in Ibaraki

One of Japan's top 3 waterfalls, Fukuroda Falls in Ibaraki are a stunning 120m-high waterfall flowing over four layers of rock...

An hour drive from Tokyo, Greenvila Auto Campground in Daigo, Ibaraki is an extremely family-friendly campground. The park features..