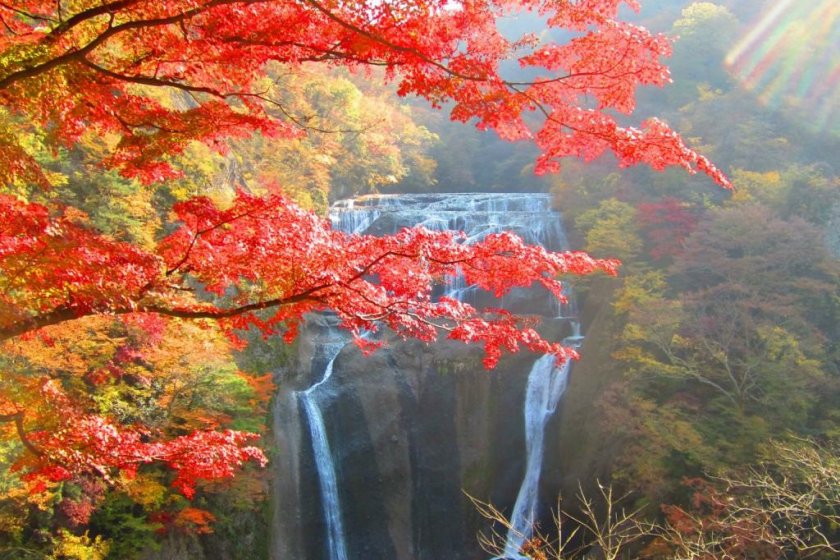 One of Japan's most beautiful waterfalls

View of Fukuroda Falls from the top of the viewing platform

Ibaraki’s famous Fukuroda Falls is located near the northern city of Daigo, roughly two hours’ drive from the capital of Mito. As it has been named as one of the three most beautiful waterfalls in Japan there is never a bad time to come take it in; in fact, the locals claim that you have to see it in all four seasons in order to really grasp its beauty.

During the summer it is framed with thick, green foliage; in the winter it partially freezes into a delicate glass sculpture; the spring brings new flowers and increased volume from rains; but the added contrast of the red leaves in autumn against the coursing water definitely increases its popularity by quite a margin.

Even on the drive into the city itself the surrounding countryside is overflowing with strikingly beautiful vistas. Halfway between Mito and Daigo the terrain becomes mountainous, dotted here and there with small creeks and rivers that sparkle enticingly in the early morning sunshine, and the range of colors from golden yellow to shocking scarlet gives one the momentary feeling they’ve been dropped into a Turner painting. As the hills and mountains arc higher into the robin’s egg blue sky the autumn leaves come into even more stark relief against the pastoral scenes of the valleys.

Despite it being before noon on a Monday morning the streets and stores were already packed with tourists, and local vendors were doing a brisk business selling local delicacies like grilled sweet fish and citron-miso rice dumplings. Finding parking was hard enough (there are even free spaces if you are lucky), but the line-up to get into the viewing area for the falls was as thick as the trees themselves. In order to contain the large numbers of tourists, the prefecture built a special viewing area fronting the falls and charges a nominal admission for entry. It is a little unfortunate that the entrance and passageways are dark, utilitarian concrete tunnels, reminding one of the bowels of a research facility, but as you exit the tunnel onto the viewing platform the sudden transit from grey half-light to the thundering beauty of the waterfall somewhat enhances the thrill.

There is an elevator to take you to the top of the viewing area, 44 meters above the entrance, from which you can see the surrounding countryside. The railings of the three viewing platforms (of which the second from the top is hands-down the best view) are crowded with amateur and professional photographers alike, but if you wait patiently you will get a chance to snap that perfect shot for yourself. Further down there is a short suspension bridge at an angle to the falls, leading to a trail up the side of the mountain forming the waterfall itself, giving different views of the area and providing covered patios for small snack-houses bordering the path.

It is easy to see why this is such a popular spot, as the blend of cerulean sky and fall foliage with the silvery threads of the wide waterfall are a sight that is both thrilling and soothing at the same time. The locals are quite friendly and the food, especially the rice dumplings and locally grown apples, are highly recommended. 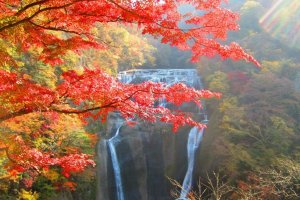 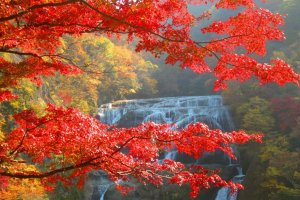 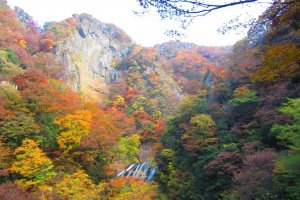 Sleiman Azizi 10 months ago
Those colours are so nice. I've only visited during the winter. Very much looking forward to visiting again in different seasons.
Reply Show all 0 replies

Kim 2 years ago
Stunning scenery - hard to go past the beauty of autumn!
Reply Show all 0 replies

Elizabeth S 3 years ago
Any time of year is beautiful at Fukuroda. Some nearby soba shops and restaurants have views onto the river. Gorgeous place.
Reply Show all 0 replies

Elena Lisina 5 years ago
Great photos and wonderful place! Thanks for sharing!
Reply Show all 0 replies