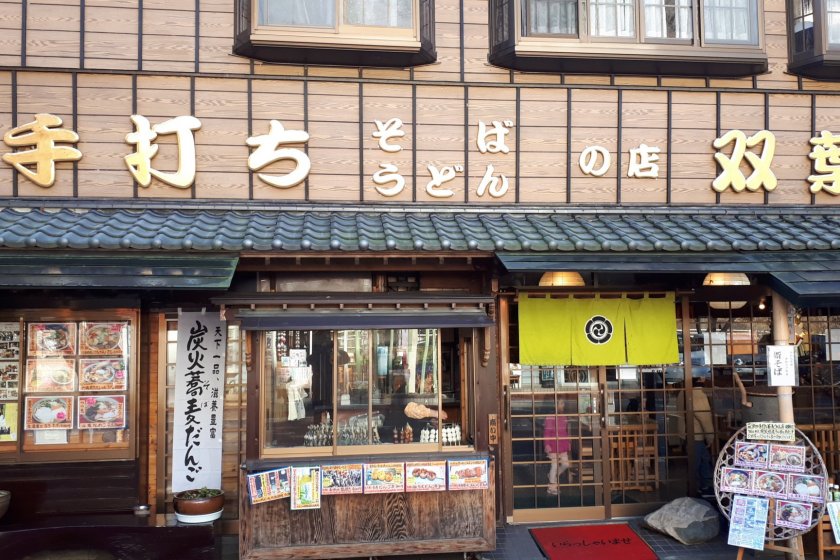 Entrance to the restaurant

One of the advantages of travelling outside of the major cities is the simplicity of choice when dining. With pretty much everything a family run operation, you would be unfortunate indeed to not eat somewhere that wasn't authentically local. Having just visited Ibaraki's magnificent Fukuroda Falls and buoyed by the experience, we were itching to satiate our appetites with something from the area.

Along the street leading towards Fukuroda Falls lies many a store selling souvenirs, ayu sweetfish, and local soba and udon noodles. Charmingly local, it didn't take us too long to find somewhere to plonk our seats and enjoy a quick feed. The smell of grilled ayu emanating from one store seemed to seal the deal as the kids, who love the taste of skewered and grilled fish, called out to us to eat at, what did the sign say, Futaba Shokudo? Sprout Dining, eh? Well, the name was certainly cute.

And cute it was. Divided into tatami and table dining areas, the older women running the store were a bundle of smiles and energetic hospitality. Menus and tourist information featured as part of the table tops, adding a quirky sense of the personal to what was already a lovely little restaurant.. The grilled ayu that drew the kids in went for JPY400 per skewer while the hand made soba and udon noodles ranged from JPY900 with traditional sansai mountain vegetables to JPY1500 for various tempura and vegetable combinations.

What really drew our attention, however, was the soba chef artisan plying his trade in the storefront window. It was mesmerising to watch. If I understood the lady next to us explaining it all correctly, the techniques and equipment being used were unique to the area. A real find, it's places like Futaba Shokudo that really help to define the rural travel experience.

A 6-minute drive from Fukuroda Station on the JR Suigun Line and a 4-minute stroll from the entrance to Fukuroda Falls. 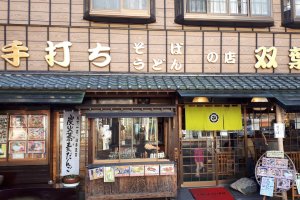 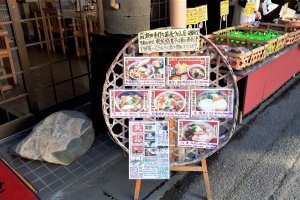 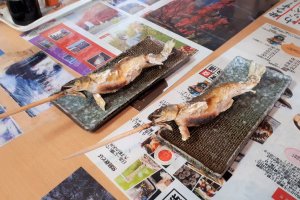 Elizabeth S 11 months ago
Ah, you enjoyed the local food there! Around Daigo-Machi the food is really good. The people are sweet, too.
Reply Show all 1 replies

Sleiman Azizi Author 11 months ago
I was surprised by the wit of one lady as we chatted. Really nice experience.
Reply

Elena Lisina 11 months ago
Ayu is still what I haven't tried yet!
Reply Show all 1 replies

Kim 11 months ago
What a nice find!!
Reply Show all 1 replies

Sleiman Azizi Author 11 months ago
It was a nice little experience.
Reply
6 comments in total