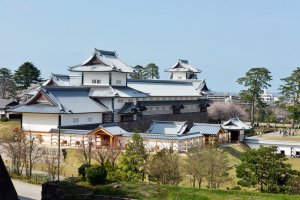 Kanazawa Castle is a partially-reconstructed castle located in Kanazawa, Ishikawa Prefecture. Up until the Meiji Restoration period in 1871, lords of the Maeda Clan occupied the castle. The castle building is part of the sprawling Kanazawa Castle Park, where you can also find the Kenrokuen Garden. In 2008, the castle was designated as a National Historic Site.

Most of the castle's original structures were burnt down during a fire in 1759. Unfortunately, another fire struck Kanazawa Castle in 1881, after several structures had already been rebuilt. Now, Kanazawa Castle has been steadily reconstructed to match how it looked in the 1850s.

Kanazawa Castle and Castle Gardens are a gem in the city's sights. Although the original buildings may no longer exist, their..

A view of Kanazawa Castle's tiled walls and Ishikawa-mon Gate can be had from the row of restaurants and shops near Kenroku-en..

This partially restored castle was the headquarter of the mighty Maeda Clan that governed the Kaga province (present-day Ishikawa..

Why not review more places in Ishikawa?

In historical Kanazawa in Japan's Ishikawa prefecture, APA Hotel Kanazawa Chuo is an affordable, comfortable hotel in the heart..

HOTEL MYSTAYS Kanazawa provides a perfect home-base of operations for any trip within Japan and if you choose to stay in Kanazawa..

Gold Leaf soft serve Ice-cream at Hakuichi's in Ishikawa prefecture's Kanazawa. The store is down the street from Kenrokuen..

Kanazawa Omicho Market is an old fresh food market that was established during the Edo period, consisting of more than 170 stalls..

Get a close-up glimpse of Kanazawa's "kitchen" at the Omicho market in the center of the city.

Located within Kanazawa Castle Park in Ishikawa Prefecture, Kenrokuen Garden is one of Japan's most famous traditional landscape gardens. Together..

The Higashi Chaya District (ひがし茶屋街) is a traditional teahouse district east of Kanazawa Station which known for its geisha performances. Compr..

Nomura Samurai House (武家屋敷跡 野村家) is a historical family estate in the Nagamachi area of Kanazawa. This restored Edo period home reveals what..