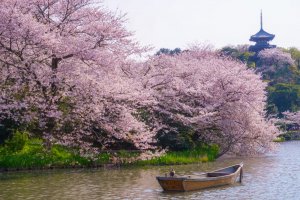 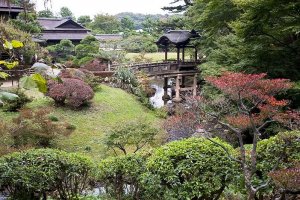 In 1859, when the port of Yokohama opened to foreign trade, silk was the country's largest export. In 1909, Japan was the world's premier silk supplier, serving markets such as the United States and Europe.

Sankeien was built by Hara Sankei, a great entrepreneur who produced and traded silk in Yokohama. In the early 1900s, he used some of his wealth to create a Japanese garden over the course of about 20 years.

The Sankeien covers approximately 175,000 square meters and extends over three valleys along the coast. It consists of an outer garden that has been open to the public since 1906 and an inner garden that was originally kept private for Sankei's personal use. Seventeen historic structures that have been relocated from Kyoto, Kamakura and other locations have been brought into harmony with nature over the four seasons to present great landscapes.

Sankeien Garden is a place of beauty and history in Yokohama.

Sankei-en Garden is generally recognized as one of Japan's most beautiful. Covered this day by a soft white blanket of snow,..

Lotus flowers at Sankeien Garden in Yokohama dance wildly in a sea breeze from Yokohama Bay.

Sankeien Garden, one of the most beautiful Japanese gardens in Honmoku, Yokohama

A Stroll Through Sankei-En Garden

Sankei-En Garden is a great place to bring special guests, who are always impressed by this very quiet, serene, setting of Japanese..

Visit the beautiful lotus ponds at Yokohama's Sankei-en Garden in mid-summer. Early mornings are best when all is serene and..

Sankeien Garden: Join me as I discover traditional Japanese culture in modern Yokohama

Sankeien Garden is comprised of an inner and outer garden with scenery that changes every season. In Autumn, the Chrysanthemum..

HOTEL MYSTAYS Yokohama, a great location for exploring the seaside

Known in Japanese as ‘Negishi Shinrin Koen’, this is one of the largest parks in Yokohama with a surface area covering over 1800 square meters. Originally..

Yokohama Chinatown, also known as Yokohama Chukagai, is Japan’s largest Chinatown. An enclave of Chinese shops and restaurants has stood in this section..