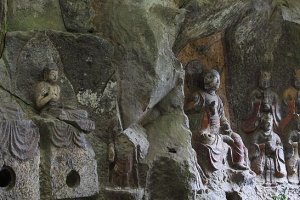 The Usuki Stone Buddhas of Oita Prefecture are comprised of four groups of carved stone Buddhas. It’s unclear why these Buddhas were carved here, however, it makes for a striking image.

Daily buses from Oita and Usuki Station ferry passengers to see the stone men. It remains a popular pilgrimage site.

A secret of Japan's island of Kyushu, the stone Buddhas of Usuki are just one of the mysteries of this lovely town. Gourmets..

Marvel at the Usuki Stone Buddhas

Over 60 stone buddha statues dating from over a thousand years ago are carved into the cliffs outside of Usuki town in eastern Oita..

The Stone Buddhas of Usuki

Around 60 buddhas are carved into the cliff of Usuki in eastern Oita prefecture and have been designated as national treasures..

For anyone wanting to experience some of Japan’s rich early history, Usuki’s stone Buddhas could be the answer!

Why not review more places in Oita?