Marvel at the Usuki Stone Buddhas

One thousand year old carvings in the Oita cliffs

Just outside the seaside town of Usuki in eastern Oita prefecture, rocky cliffs rise above rice paddies and fields of wildflowers. From a distance, these cliffs seem like any other. Get up close, however, and you'll be treated to a collection of some of the oldest stone buddha statues in Japan.

When Buddhism arrived in Japan from China (via the Korean Peninsula), Kyushu was the first of Japan's islands to embrace the new religion. When a temple (now long gone) was established outside of Usuki town in the late Heian Period (794-1185), the enthusiastic followers also began carving images of the Buddha into the rock faces.

It's rather amazing that the images still exist today. The soft rock face is easily weathered and years of wind and rain have taken their toll on nearly all of the 60 statues. When the site underwent extensive renovations in the 1970s and again in the 1990s, a series of protective sheds was built over the Buddhas to shield them from the elements.

The statues exist in about eight separate groupings, linked together by a (mostly) wheelchair and stroller friendly walking path with the occasional set of stairs. The second set of statues is one of the site's most impressive - the large Amida Buddha, flanked by two smaller statues, seems incredibly life-like and is a testament to the skill of the artisans. Further on up the path, the third grouping of statues still bears traces of the colorful paint that once adorned all of the carvings. Of all the Buddhas at Usuki, the carving of the ten kings in this section is one of the most intricate and impressive, perhaps because it was one of the last ones created (sometime in the early Kamakura Period, which lasted from 1185 to 1333).

An exploration of the site will take about 30 minutes and an English pamphlet is available to explain a bit about each grouping of statues. For those who can understand Japanese, there are also tape-recorded explanations at each stop that go into more detail on the statues' history and creation.

While the buddha statues are the main draw here, it's worth following the walking path around the valley and past the pond that's choked with lotus flowers in July and August. Come in the spring and you'll also be treated to a number of cherry trees near the base of the cliffs. 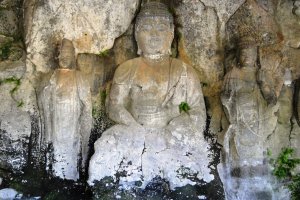 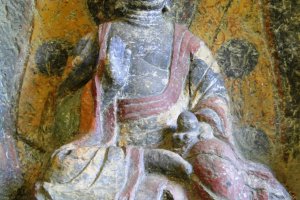 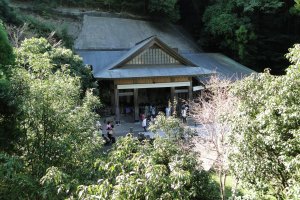 Elizabeth S a year ago
What a testament to the wave of Buddhism that swept into Japan in the Heian Period.

Usually, Buddha statues are simply stone, but that painted one is amazing. I wonder, the colored statues must have been brilliant.
Reply Show all 0 replies
1 comment in total