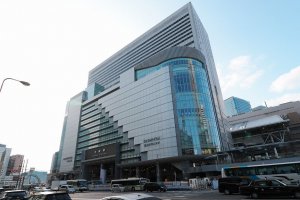 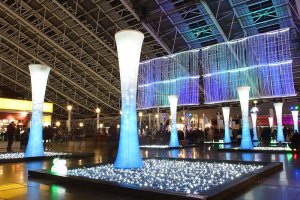 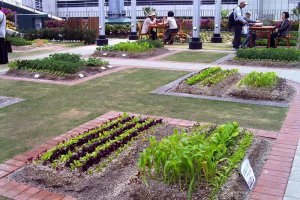 Osaka Station is a major station in the Umeda district of Osaka. It is served by a large number of local and interregional trains, but not by the Shinkansen that stop at Shin-Osaka Station. The formerly dark and cramped station has undergone extensive renovations and Reborn in 2011 as Osaka Station City, one of the most attractive train stations in Japan.

The interior of Osaka Station City's shopping arcades are chic and with a contemporary design feel. Find Daimaru Department Store at the South Gate Building, and Lucua shopping complex at the North Gate Building.

The park is a collage of traditional Japanese garden with cherry blossoms, oaks and maple trees. The garden is a fusion of contemporary and traditional design that is sure to leave you feeling calm and fresh.

JR Osaka Station gives you easy access to the whole shopping and sightseeing area of Osaka.

Osaka Station is surely one of the biggest and busiest stations in Japan, supporting the interwoven railway network.

Osaka Station City's hidden garden is a fusion of contemporary and traditional design. It's sure to leave you feeling calm..

The Inter-continental Hotel is a welcome addition to the luxury hotel circuit, and along with other 5 star hotels in the area, like..

ANA Crowne Plaza takes its cue from the tradition of Omotenashi, the heart of Japanese hospitality. It is about anticipating your..

For fans of the much-loved Sanrio character Pompompurin, a pop-up cafe is running in Osaka from January 27th through until April..

Start your trip or end your journey in Osaka with a cup of nice coffee and delicious bagel. Situated near one of Umeda Station..

A good place to stuff yourself at Osaka Station

The Umeda Sky Building in Osaka is the city's best-known landmark and was built in 1993. It is located in the Kita district of Osaka, near Osaka and..

Osaka Castle Park is a public urban park and a historic site in the prefecture of the same name. It is the second largest park in the city and, in c..

Osaka Castle is one of the city’s most iconic sites and draws numerous visitors to its spacious park and imposing keep every year.  Osaka Castle was..