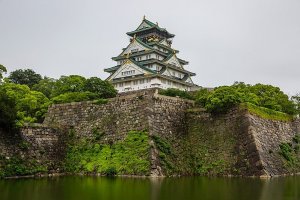 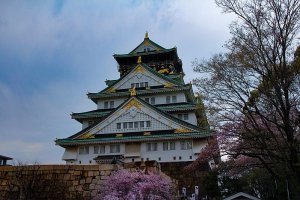 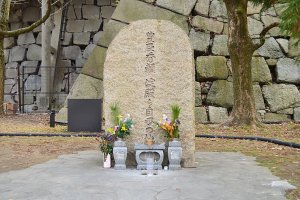 Osaka Castle is one of the city’s most iconic sites and draws numerous visitors to its spacious park and imposing keep every year.

Osaka Castle was first built by warlord Toyotomi Hideyoshi in 1583. From this stronghold, Hideyoshi put down rebellions and worked to unite the provinces of Japan. After his death, his former vassal Tokugawa Ieyasu took control of the country himself and established the longest running military rule in history. To quell any attempts of challenge from Hideyoshi’s former supporters, Ieyasu torched Osaka Castle in 1615, leaving it in cinders. The keep was later reconstructed by the Tokugawa clan, though fires and bombing raids have destroyed it several times. Today’s main tower dates from 1931 and has been recognized as an Important Cultural Property. A recent renovation from 1995-1997 added an elevator and made the keep completely accessible to disabled visitors.

The interior of the castle houses a history museum that details the life of Toyotomi Hideyoshi and the power struggles of the late 16th century. Approximately 10,000 items – including weaponry, armor, folding screens and personal letters – are displayed on a rotating basis. A movie theater offers a selection of five short films on the famed warlord; though the audio is in Japanese only, subtitles in multiple languages are provided. The top floor of Osaka Castle doubles as an observation desk, offering visitors a bird’s-eye view of the surrounding park and the golden shachiko (figures that resemble a cross between a fish and a tiger) that adorn the roof.

Those looking for a unique photo memory of their time in Japan may want to rent a samurai outfit, complete with headgear, from the castle’s costume corner. For a small fee, visitors can feel like they’re a part of feudal Japan.

In springtime, the grounds of Osaka Castle become the perfect picnic spot for sakura fans, as hundreds of cherry blossom trees shower the site with pale pink petals. Visitors can even take a boat ride on the castle moat, for a close-up glimpse of the imposing, stone fortifications.

Osaka Castle is easily accessible from a variety of metro stations that surround the grounds. There is an admission fee (¥600) to visit the main keep and the Ninomaru Garden (¥200).

Construction of the beautiful 5-story tenshu began in 1658 and finished just two years later. It was destroyed by a lightning-caused fire in 1665. The current structure was rebuilt in 1931.

This stone marks the place where Toyotomi Hideyori and his mother, Yodo-Dono, committed suicide after the fall of Osaka Castle. It remains well-cared for to this day.

The Otemon Gate has been designated as an important cultural asset by the Japanese government. This western gate is the main entrance onto the castle grounds.

To reach Osaka Castle, the nearest station is Osaka-jo-koen (大阪城公園) on the JR Loop Line.

My Visit to Osaka Castle

Osaka Castle is one of the symbols of Osaka City. The entire area covers about two square kilometers with lots of trees and green..

Osaka Castle Observatory: the roof of the famous castle is one way to discover the second-biggest Japanese city from above.

A visit to Osaka Castle offers a chance to travel back in time and find out more about its historical background.

Osaka Castle has always been in the shadow of another highly recommended castle, famous for its architectural beauty, Himeji Castle...

Osaka castle is a must-see destination. This castle is one of the most beautiful castles in Japan. The castle was built in 158..

Step-by-step introduction to Osaka Castle and spacious park surrounding it. This takes you from the East Outer Moat to the Inner..

Step-by-step introduction to Osaka Castle and park. This takes you from Gokurakubashi Bridge to the place where Toyotomi Hidey..

Osaka Castle 4: This takes you from Gokurakubashi Bridge to 'Marked Stones Square' and the bullet marks on surface of stone..

Osaka Castle 6: From 'Tenshushita Shikirimon Gate' to the main tower of Osaka Castle. There are dark-colored stones (&..

Osaka Castle 7: Main tower of Osaka Castle; the open space in front of it has the 'Kinzo Storehouse', beautiful stones and..

Osaka Castle 9: Inside the Main tower of Osaka Castle; Various kinds of artifacts are on display, 3D movies, or samurai armor to..

Osaka Castle 12: Only two turrets (first and sixth) remain out of seven turrets originally built in 1628; they are designated as..

A Quiet Evening by Osaka Castle

Arriving late for the museum at Osaka Castle, I instead enjoyed its surroundings, the beautiful sunset and also visited Hokoku Jinja...

The first sequel to "Godzilla" (1954) features a monster battle at Osaka Castle.

Hotel MyStays Otemae is a perfect place for accommodation in Osaka, with subway access to Namba. It has good service, including..

Close to Osaka Castle in Japan's third biggest city, this hotel is modern, comfortable and affordable.

The main attractive features of the Hotel City Plaza Osaka is the rooftop spa with a rest zone outside, and a variety of special..

Located on the top floor of Maraiza’s Landmark Square, the terrace offers panoramic views over Osaka Castle as well as a Japan..

How many ways can I declare my love for tofu? Tenderly and melt in the mouth soft tofu in miso soup, with a reduced sweet miso marinade..

Magatama's original concept was to run a cafe that also provides a space for full spectrum of people who can drop by for i..

Osaka has been the capital of Bunraku, the traditional Japanese puppet theater, for many centuries. The National Bunraku Theater is a two-hall and e..