When I choose a hotel, the most important thing for me is 'space' (I'm claustrophobic), so I tried to find a hotel with a spacious room at a reasonable price. Most of the hotels in the area offered 20 to 30 ㎡ at the largest, and the rooms with 30㎡ exceeded 30,000 yen per night. Out of the question. Then I found a luxurious-looking room with 41㎡ at 24,000 yen per night including breakfast for two. Hotel breakfasts are overpriced all over the world, so excluding breakfast it would only cost 20,000 yen per night for a 41㎡ room! That's nice, isn't it? The hotel that provided such a spacious room at such a reasonable price was the Westin Osaka, which is a 15 to 20 minute walk away from JR Osaka station.

A 15 to 20 min. walk away from the station sounds a little bit too far when you have to drag your big luggage behind you. But don't worry, this hotel provides a free shuttle bus ride between the hotel and JR Osaka station every 15 minutes. Doubly nice! Thus, I booked the room at the Westin Osaka for two nights, smiled a satisfied smile, and waited for the day to come when I would go to Osaka.

The day came and I arrived at JR Osaka station on schedule. I was supposed to take the hotel shuttle bus from the Sakurabashi Gate but couldn't find it, got lost in a maze of the newly-built gigantic JR Osaka station, wandered about for twenty minutes dragging my big luggage behind me (I would've walked to the hotel if I knew I would get lost!). In the end, I gave up looking for the gate in question and ended up hailing a taxi. But fortunately, it only cost me 680 yen from the station to the hotel, so even if you can't find the Sakurabashi Gate for some reason don't worry! Also, there are many restaurants and cafe in front of the Sakurabashi Gate Bus Stop, so while you are waiting for a bus to arrive you can enjoy a refreshing drink or two before heading to the hotel. For your information, the shuttle buses bound for the Rihga Royal Hotel and the Imperial Hotel Osaka also depart from this bus stop.

When the taxi got close to the hotel, a stylish skyscraper jumped up before my eyes. It had a unique, futuristic structure with a bridge connecting two buildings in the air. I had seen this building before a few times from the train and every time I saw it I was amazed and fascinated by its design. And the taxi was driving closer and closer to this building. What? Is it the Westin Osaka? Am I going to stay in that cool building? My heart started to beat faster and I was getting excited by the minute.

The hotel looked gorgeous with a chic, stylish interior. Well, this is a five-star American hotel, so you wouldn't expect otherwise, would you? One thing that delighted me was one of the hotel staff at the check-in counter was speaking in Osaka dialect. You don't usually find any foreign hotel staff speaking in the local dialect in Japan, do you? Osaka is an exception. They are proud of their culture and heritage, which includes their dialect, too.

The deluxe-double room I stayed in had a king-size bed called 'heavenly bed'; according to the hotel the beds here give you a 'sleeping on a cloud' experience. Also, the room includes a separate shower booth and bath tub as well as a closet with a big door mirror. I wrote, 'deluxe', but the deluxe rooms are at the lowest level here and the level of the rooms go up, up, up from deluxe rooms. But even at the lowest level, my room was on the 17th floor with a great view of Osaka city, and was 41㎡, so you don't really need to pay extra to go up the ladder to the higher level rooms.

Aside from the space, quality accommodation, gorgeous interior, friendly staff and convenient location, there is a garden called 'Island Garden' next to the hotel. You can visit there through the lounge terrace on the first floor. Also, the Umeda Sky Building that I mentioned above is located next to this hotel and has a 'Floating Garden Observatory' which provides a breath-taking view of Osaka city. I can promise that staying at the Westing Osaka would be a special experience for you, and you can have that experience at an affordable price. 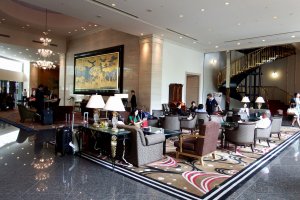 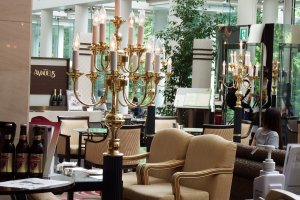 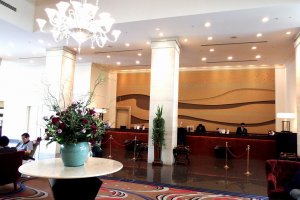 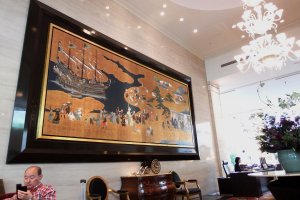 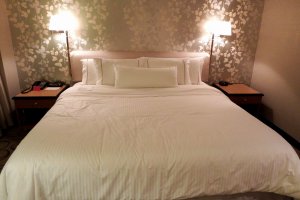 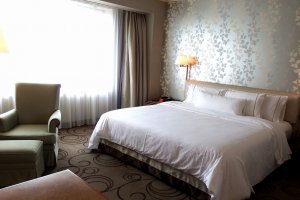 Bonson Lam a year ago
You're like a country girl staying in the big city for the first time. I really enjoyed the Westin in Kyoto, and hope to stay here in the future.
Reply Show all 0 replies

Kim 3 years ago
Never knew there was a Westin there! Stayed in Westin hotels abroad though and have always had very good experiences!
Reply Show all 0 replies

Takako Sakamoto Author 7 years ago
Hi, thanks for reading my article. Osaka is an exciting place, do visit there when you have a chance!
Reply Show all 0 replies

Tyra 'nell Pille-Lu 7 years ago
I've always wanted to travel Osaka. Nice tips about the hotel. Thank you. Your experience also gave me an overview of the place. Enjoy your future travels.
Reply Show all 0 replies
4 comments in total