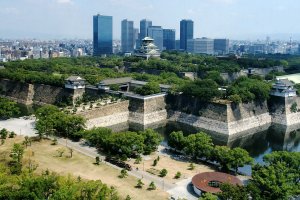 Osaka Castle Park is a public urban park and a historic site in the prefecture of the same name. It is the second largest park in the city and, in combination with Osaka Castle, is a popular photo opportunity.

The castle park is located in the south of Ōkawa and occupies a large area in the center of the city of Osaka, a total of about two square kilometers. In addition to extensive green areas and sports facilities, it also includes a multi-purpose arena (Osakajo Hall) and a shrine dedicated to Toyotomi Hideyoshi, a Japanese commander and politician who made a decisive contribution to the unification of modern Japan. He built Osaka Castle in 1583 in order to rule over Japan from there.

In early April, Osaka Castle Park is one of the most popular places to see the cherry blossom.

Osaka Castle Park surrounds a majestic 16th century castle, perfect spot for you to have a glimpse of the greener side of Osaka

Osaka Castle Park is home to a significant part of history in Osaka. Home to Osaka Castle, the Hokoku Shrine and other historical..

Osaka Castle Park 2 - Hōkoku Shrine: This shrine was built in 1879 enshrining Toyotomi Hideyoshi by the order of Meiji Emperor.

Osaka Castle was built more than 400 years ago, when the military commander Hideyoshi Toyotomi completed the military unification..

At Osaka Castle Park, one can enjoy the cherry blossoms blooming alongside the famous Osaka Castle. The park has over 4300 cherry..

Osaka Castle is one of the city’s most iconic sites and draws numerous visitors to its spacious park and imposing keep every year.  Osaka Castle was..

Hotel MyStays Otemae is a perfect place for accommodation in Osaka, with subway access to Namba. It has good service, including..

Close to Osaka Castle in Japan's third biggest city, this hotel is modern, comfortable and affordable.

The main attractive features of the Hotel City Plaza Osaka is the rooftop spa with a rest zone outside, and a variety of special..

Located on the top floor of Maraiza’s Landmark Square, the terrace offers panoramic views over Osaka Castle as well as a Japan..

How many ways can I declare my love for tofu? Tenderly and melt in the mouth soft tofu in miso soup, with a reduced sweet miso marinade..

Magatama's original concept was to run a cafe that also provides a space for full spectrum of people who can drop by for i..

Osaka has been the capital of Bunraku, the traditional Japanese puppet theater, for many centuries. The National Bunraku Theater is a two-hall and e..