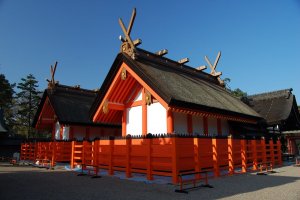 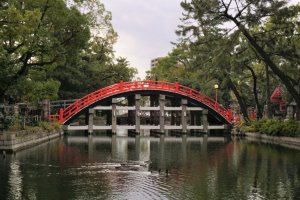 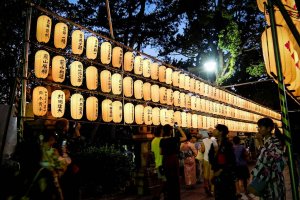 Sumiyoshi Taisha, also known as Sumiyoshi Grand Shrine, is one of the most famous shrines in Osaka and one of the oldest in Japan. During hatsumode, the first shrine visit of the new year, over two million people visit this unique shrine. The shrine grounds are a picture of tranquility with vermillion shrine buildings, natural beauty, and glimmering water.

Sumiyoshi Taisha is cited in two of Japan’s oldest books, the Kojiki and the Nihon Shoki, as well as one of the world’s oldest stories, Tale of Genji. Legend has it that Sumiyoshi Taisha was founded in 211 CE by Empress Jingu who dedicated it to the Sumiyoshi Sanjin, which is a collective name for the three Shinto gods of the sea and later, waka poetry. Although landlocked now, the shrine used to overlook the ocean. Later, Empress Jingu was also enshrined on the grounds. This act linked the shrine to her son, Emperor Ojin, who was deified as Hachiman, god of war. With the enshrinement of various kami (gods), the shrine is a popular place to pray for a variety of reasons, including safe seas, travel, poetry, fighting (such as martial arts), military, and general health and prosperity.

Sumiyoshi Taisha is the head shrine of over two thousand Sumiyoshi shrines across Japan.

Interestingly, Sumiyoshi Taisha was founded before the introduction of Buddhism in Japan, giving it a unique architectural style called Sumiyoshi-zukuri, which is free of influence from the Asian mainland. This purely Japanese style is registered as a national treasure and characterized by straight roofs, rather than curved ones, decorated with forked finials that resemble crossed poles, and five horizontal billets. The shrine’s four main halls are painted vermillion and surrounded by fences.

Sumiyoshi Taisha is home to dozens of shrine buildings, which are complemented by torii gates, rich nature, and stone lanterns. Stroll through the sacred grounds and allow the peaceful energy to rejuvenate your mind and body.

When you first enter the shrine grounds, you are greeted by the stunning Sorihashi Bridge, which is similarly painted vibrant red. One of the most scenic views at the shrine is the bridge’s side profile along the water. The small canal acts as a perfect mirror, reflecting the bridge’s high arch and creating the illusion of a continuous loop. In the spring and summer time, the lush greenery of the area coupled with the blue skies are a wonderful contrast against the bridge’s saturated coloring. After crossing the bridge, take a few moments to observe the visually intriguing entrance and its many different perspectives.

The four main halls at Sumiyoshi Taisha are dedicated to the three gods of the sea and Empress Jingu. After entering the shrine grounds from Sorihashi Bridge, you will first see two main halls located beside each other. The remaining two halls are positioned in a straight line behind the more centralized one. These buildings exemplify the Sumiyoshi-zukuri style and are painted in shades of red, from vermillion to darker and more natural tones, which are contrasted against pure white walls. The rare and treasured architectural style is a mesmerizing visual and a must see if you are visiting Osaka.

Evening of Sumiyoshi Matsuri with locals clad in kimonos

Sumiyoshi Taisha holds festivals year round, starting with hatsumode in January, when it becomes the most visited shrine in Osaka. The shrine grounds come alive with traditional festivities, food stalls, and gaming booths as people pray for good luck.

One of the shrine’s most important festivals is Sumiyoshi Matsuri from July 30th to August 1st. During this summer festival, the shrine holds a purification ritual and organizes a parade of mikoshi (portable shrines). Just before Sumiyoshi Matsuri is Otaue Shinto Service in June, which is considered an Important Intangible Folk Cultural Property of Japan. During this festival, participants plant rice seedlings and perform traditional dances in hopes of an abundant harvest.

Japan reaffirms its deep connections with its staple crop at the annual Sumiyoshi Shrine rice-planting festival in Osaka on June..

The Sumiyoshi Taisha Shrine is one of Japan's oldest shrines, being the most famous of all Sumiyoshi Shrines. It boasts a unique..

Going inside the Sumiyoshi Taisha temple in southern Osaka

Sumiyoshi is a place with two beautiful sights just near each other. Turning left out of Sumiyoshi Taisha station will take yo..

The headquarters of all Sumiyoshi shrines in Japan. Come see the unique Drum Bridge and be mesmerized with the stone lanterns and..

Sumiyoshi Taisha of Osaka is a very popular place to visit for special occasions like Hatsumode (first visit to a shrine on Ne..

Japan reaffirms its deep connections with its staple crop at the annual Sumiyoshi Shrine rice-planting festival in Osaka on June..

In the midst of the modern face of Tennoji is Miyako Hotel, part of the Miyako group which has sister hotels in the parklands of..

Peace and quiet is what makes the perfect hotel for some. If this is an important trait for you then opting for an adults only..

Quaint and homey café in a quiet Osaka district

Niku Fes Osaka is an annual event celebrating all things meat. Carnivores will be delighted with the range of eats on offer, with..

Apop-up cafe event dedicated to the K-Pop band Seventeen is taking place in Osaka, as well as several other locations across Japan...

The Abenobashi Terminal Building is located in Abenosuji Itchome, Osaka City. The building is a commercially used multifunctional building and not o..

Tenshiba is the entrance area to Tennoji Park, which was converted into a free recreation area for the people of Osaka in October 2015. It is laid out..

Tsutenkaku Tower, standing at 103 meters tall, is an unmistakable symbol of Osaka and located in the Shinsekai area. The towering 8-sided structure’s..