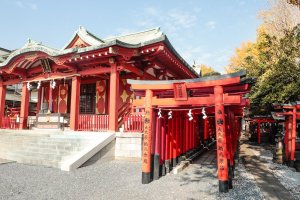 The area of ​​the Anamori Inari Shrine is littered with miniature shrines (Oyashiro), which can be reached through a corridor of Torii (Japanese gates). Each of these little shrines is dedicated to a different blessing. The range of possible blessings is wide, ranging from economic luck to exam success.

Only 5 minutes by train from Haneda Airport, Anamori Inari Shrine is full of the characteristic red torii and fox statues.

In late August, gather with the Kamata locals to light a candle and make a wish on one of hundreds of handmade lanterns.

If you like money or want good fortune then Tokyo’s Anamori-inari Shrine is the place to come. Located just a stone’s throw aw..

HOTEL MYSTAYS Haneda in Tokyo is located very close to Haneda airport making it extremely convenient for those arriving late i..

Kawasaki Daishi is the popular name of Heiken-ji, a Buddhist temple in Kawasaki, Japan. Founded in 1128, it is the headquarters of the Chizan sect o..

This land of leisure is full of fun amusement facilities complete with a variety of restaurants. In addition to a natural hot spring facility for a day..