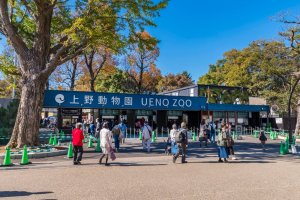 Ueno Zoo is the oldest zoo in Japan and one of Ueno's greatest attractions. The zoo began as a collection of wild animals affiliated with the National Museum of Natural History and first opened as a public zoo on March 20, 1882. The zoo has expanded significantly since then and is now home to over 3,000 animals and 400 different species. The attraction of Ueno Zoo, however, is the pandas, also because they have successfully reproduced. Ueno Zoo is actively committed to the conservation of wild animals.

The zoo is divided into two sections, a west and an east park, each with different animal species. The two areas are connected by a bridge. To the east are the pandas, Asian elephants, large numbers of bears and larger mammals like gorillas, tigers and lions. In the west area there is a petting zoo and a reptile and amphibious house. This area also focuses on animals from Africa: rhinos, hippos, giraffes and zebras.

A five-story pagoda and a tea house from the 17th century round off the visit to the zoo and give this historic zoo a typically Japanese touch.

When you want to go to a zoo in the Tokyo area, your best option is Ueno Zoo. Located in Ueno Park quite close to the station, it..

Ueno Zoo in Tokyo is one of the most surreal zoos you will ever experience. It’s like a world of magic. Within the zoo you wil..

After 60 years of service, Ueno Zoo's monorail closed down on Thursday 31st October 2019. A bus service will replace the monorail..

Ueno Zoo #3 – Various Monkeys: There are 8 gorillas in Ueno Zoo. They look a bit fierce, but actually, they are vegetarians an..

Ueno Zoo, located within Ueno Park, covers over 14.3 hectares and is home to more than 2,600 animals.

The National Museum of Nature and Science is in the northeast corner of Ueno Park in Tokyo. Opened in 1871, it has had several names, including Ministry..