The end of a much loved era

After years of speculation, Tokyo's Ueno Zoo has decided to finally end services of its much-loved monorail. After an impressive six decades, Thursday, 31st October 2019 saw visitors have their last ride on the famous track with concerns over the aging train and its facilities the reason for its closure.

Japan's first passenger monorail system, Tokyo’s Metropolitan Government began the 330-metre suspended-type monorail back in 1957 and by the time of its closure, Ueno Zoo had seen over 65 million passengers use the service. A 90-second one-way trip transported visitors back and forth between the zoo’s East Garden and West Garden.

A decision has yet to be made by the metropolitan government as to whether or not the monorail service will be upgraded and modernised or replaced by another transport system, presumably a shuttle bus one.

In the mid-1980s, there was talk of the monorail closing down but following a very strong public response, authorities decided to continue with a refurbishment of the two-carriage service.

The monorail's final trip was an evening one from the West Garden station to the East Garden one. Passengers were chosen by lottery with everyone, including both adults and children, enjoying the last monorail ride.

Ueno Zoo is made up of two areas, the East Garden and the West Garden, with the monorail having connected both. The famous Shinobazu Pond, located in the zoo's West Garden, provided a picturesque background while the monorail carriages made their way between stations.

Until a decision is made on the future of the service, a bus will be made available to transport visitors between gardens. The monorail train itself will remain on display at the upper East Garden station until Sunday, 24th of November 2019.

Find out more about Ueno Zoo. 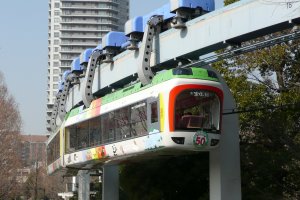 Sleiman Azizi Author 10 months ago
It's pretty cheap to visit and quite expansive.
Reply

Elena Lisina 10 months ago
I want to see panda, so hope to visit some day. :)
Reply

Elizabeth S 10 months ago
Ah! Part of the experience of Ueno Zoo was the very short ride on the beloved monorail.

But for monorail enthusiasts, there are many in the Tokyo area. Chiba City has the world’s longest suspended monorail.
Reply Show all 1 replies

Sleiman Azizi Author 10 months ago
The kids loved the monorail. I hope they can refurbish it. A shuttle bus just doesn't do it justice.
Reply

Kim B 10 months ago
End of an era indeed.
Reply Show all 1 replies

Sleiman Azizi Author 10 months ago
My son said he didn't want to go to the zoo if the monorail wasn't open!
Reply
7 comments in total