Running now for over 40 years, the annual Ueno Toshogu Shrine Spring Peony Festival celebrates the color and beauty of these lovely blooms. The peony garden on the shrine grounds was opened back in 1980 in recognition of Sino-Japanese friendship - peonies were introduced to Japan from China for medicinal purposes back in the Nara Period.

The garden is home to approximately 600 peony plants which comprise of around 110 varieties, and visitors will find numerous places around the grounds that make for incredibly picturesque photo spots.

Adult admission to the spring festival is priced at 700 yen.

Ueno Toshogu Shrine is located within Ueno Park, and can be accessed in under 10 minutes on foot from Ueno Station. The station is served by various lines including numerous shinkansen routes, the JR Yamanote, Joban, and Takasaki Lines, and the Tokyo Metro Ginza and Hibiya Lines.

Since parking in the area is typically crowded and expensive, public transportation is advised whenever possible. 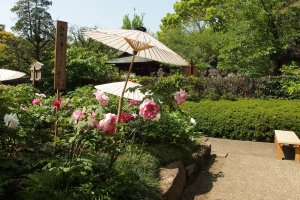